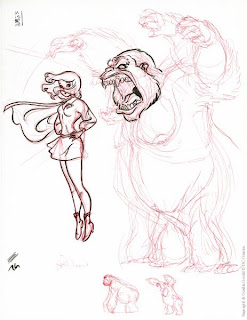 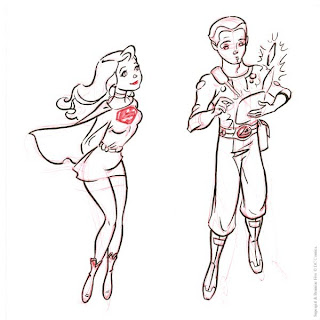 I drew a couple of set ups featuring DC's maid of might in my sketchbook. In part, further refining an animation friendly style; in other part, playing with some new markers, Faber-Castell PITT artist pens with the soft "B" nibs. They sort of act like a small round brush.

I often revisit the early 1970's costume with the V-neck, puffy sleeve blouse and red shorts, or an allusion to it (a). I favor a skirt over shorts or hot-pants. Skirts and capes ought to look good on a flying figure in animation. On that thought, animation design probably favors a large chest emblem (b) of the original 1960's costume. But then again, thinking how Superman's "S" has poorly tracked and flickered in animation, maybe the small patch is the way to go, cheating with a red triangle for the in-betweens. Current animation styles would lead me to think that this broken or implied line style is not animation friendly. If so, I say that computer colorists are lazy.

I don't draw a lot of gorillas (a). I have neither figured out Brainiac Five (b), nor subsequently the Legion of Superheroes quite yet. I have, however, decided that his time traveling disguise is student, Brian Pfeiffer.

Supergirl, Gorilla Grodd, Brainiac Five, Legion of Superheroes © DC Comics
Posted by Braynyac at 9/28/2008 No comments: Links to this post

Email ThisBlogThis!Share to TwitterShare to FacebookShare to Pinterest
Labels: Supergirl 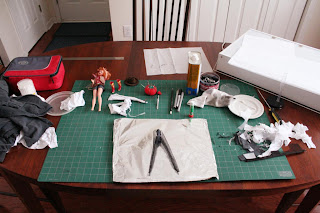 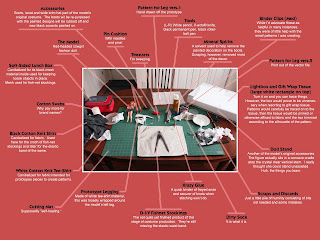 I got distracted with an attempt to re-dress a Barbie doll in a Tuff-Girl costume.

I only got as far as what you set here - fishnet stockings.

I canibalized material from old shirts and mesh from a soft-sided lunch box. The patterns were home-made, extrapolated from swatches of material wrapped around my model's legs for prototypes. The mesh material wasn't so much stitched together as tied and glued together.

The legs of the finished product are a bit uneven and a bit undersized, because the prototype was stretchy and the mesh not so much. This makes me suspect that once they're pulled on to the model (IF they can be pulled on), I should plan to leave them be, and hope that the boots fit around the stocking legs.

I had hoped that she would be in full costume to ride atop my radio-controlled car for the race (more on the race in a separate article). But alas, three nights for me who's unexperienced with pattern making and and novice with sewing was too little time.

Ultimately, I plan to develop my patterns and include them as supplemental material in my comic book, Unstoppable Tuff-Girl. I could also have a 12" Tuff-Girl perched at my booth/table as I make my comic convention rounds.

First things are first - I need to draw a couple of stories.


"Barbie" copyright Mattel.
Posted by Braynyac at 9/27/2008 No comments: Links to this post

When I was self publishing my "zine," Monotony, the strips were issued in pairs, just like on this blog. "Ah," I can hear, NOW you get it. This had allowed me to tell the story which forked into Monster's sub-conscious (6/17) and un-conscious Monster. This story-telling device would inspire newspaper strip idea yet to be realized.

"Squidge," isn't that a funny word?

In order of appearance (6/18): Murray (cheetah), Monster (monster), Nick (striped skunk, so practical), Edie (red squirrel, I like her plain spoken grasp of real world conditions), Polly (penguin), Barron (stuffed bear), Wednesdae (ermine, is that right? I should check my files), Checkov (dragon, so keeping the fun going). All in all, pretty much TAGS' core characters.
Posted by Braynyac at 9/11/2008 No comments: Links to this post 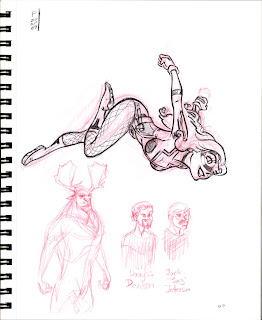 Cartoony Tuff-Girl in a possible pose for a cover image. If my faux Caniff (Terry and the Pirates) style starts to get stiff with the posing, I'll switch to a pseudo Chic Young (Blondie) style. It's usually a style that's more fun to draw.

On the bottom left a creature design >blech<, and a couple of thugs, Doug Davidson and Jack "Bug" Jefferson. They're pretty much my Rosencrans and Guildensterns (Hamlet, Wm. Shakespeare) of Tuff-Girl. Tuff-Girl's rogues gallery of adversaries will change per feature, but Doug and Bug will pop up as hired help.
Posted by Braynyac at 9/11/2008 No comments: Links to this post

I assembled this, what I'd describe either as a parlor game or personality test, and perhaps a mix of both. It's sixteen (16) statements that invite opinionated responses from the participant.

Gather a small group of people, each of whom fills out copies of the sheet. Then the host gathers the sheets and reads off each item, asking the group, "Who said that?"

Play becomes tricky whether or not you keep score, because any given member is going to be presented with the item to which she/he knows who said that - she/he did. To avoid the giveaway, "I said that," they had to tell misleading guesses.

I had put this together for our illustration group at Cartoon Network, so the topics cover cartoons, comics and television.

1/ Name of a celebrity popular with everybody except by you:

3/ Hanna-Barbera character(s) most deserving of a second career:

4/ Favorite television series to run at least one (1) season in black and white:

5/ This televised commercial advertisement made me laugh:

7/ This televised commercial advertisement is stupid:

8/ Topping, condiment, seasoning or sauce I most heartily recommend:

11/ Character in a comic book I most relate to:

12/ Somebody please cancel this television series:

13/ Name of an artistic or creative person not in the visual arts who has inspired me:

15/ The most iconic, fictitious object I can think of:

16/ Television series, stage play of motion picture that would have been greatly improved with the addition of singing bears:

My favorite is #14. Actually No's 2, 6, 10, and 14 are curious because the directives don't state by what criteria you are suppose to choose from the lists. Could it be your favorite, the most lyrical sounding or is it a matter of random choice? Part of the game is to find out why people said what they did.

#16 is my second favorite because it's so goofy. There's a part of me that wants to see singing bears in everything.

Mix Me Something New 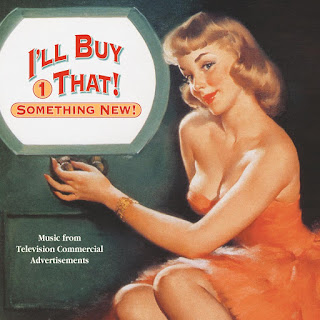 One of the things I enjoy about down loading music is finding tunes from television commercials advertisements. Google make it even easier.

Here is a list that I put together on a CD:

That last track is a not so subtle commentary on consumerism, although I'm pretty sure somebody has used it in a television commercial ad, for the irony or not.

For my research, the site "What's That Called?" has been helpful and fun. It features music used in USA commercials including video content.
http://www.whatsthatcalled.com

Firebrand was a fun site to checkout entertaining ads, but now it's closed.
Posted by Braynyac at 9/01/2008 No comments: Links to this post

6/7: Guy (dalmatian) tags Monster with the impromptu nickname "skids." The name wouldn't stick. Probably because there wouldn't be much more inter-play between the two. Polly (penguin) walks through. What’s that bump off of Monster shoulder in panel 2? Hmnn...

6/8: Hans (Fox, off-stage) at bat, Shirley (doe, off-stage) pitching, Nick (striped skunk, off-stage) runner, Monster (monster) third base. I wonder now if I kept reoccuring players consistent to their teams. You don't often see text crossing panel gutters in newspaper strips. I suppose there was a tradition to allow newspaper publishers the flexibility of stretching and compressing strips to accommodate their layouts.

Regarding the logo design, it is pretty much the shape and style of the Disneyland cast member name tags. For a long time, they were pretty plain: white fronts and red pin backs. When the letters were engraved, the red would be revealed.
Posted by Braynyac at 9/01/2008 No comments: Links to this post