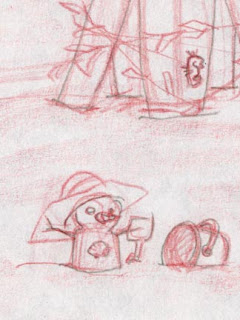 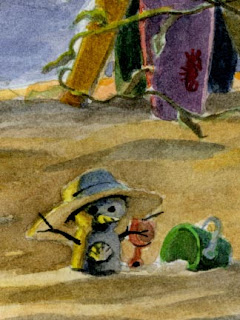 As soon as fall hits, the clock starts; the countdown to the end of another year and the beginning of a new one. In between, there arise successive holidays each bigger than the last. On my mental production schedule, the autumnal equinox means that it’s time to start on Christmas cards.

This year it concerns Little Tuffy and the Tuf Gurlz, a front-back spread and in watercolor. I’ll reveal the whole image some time after the New Year (sooner perhaps on “Fan of Bryan Mon” on FaceBook). However, in this detail, I demonstrate my restlessness as an artist; meaning that as long as I’m working on a piece of art, I’m tweaking it. In the draft, I roughly drew the layout in red pencil. I then transferred the image to watercolor paper by rubbing graphite on the back and drawing over key parts with a hard graphite pencil.

You’ll note that I did not transfer the seaweed vines (at top wrapped around a cluster of surfboards), nor by accident the sandman’s hat. The prior allowed me to finalize the seaweed pattern on the watercolor paper more cleanly. The latter only meant that I had to draw a new hat. I might not have redrawn a wider brim in the transfer process, but certainly being forced to draw a hat granted me liberty to do do so or draw a different style hat if I wanted.

Everything else, including placement of shadows to suggest the undulating surface of the beach is part of the coloring process. I’m only a painter because of a medium. But more accurately, I am a colorist, layering on colors to manipulate focus, suggest temperature or emotion, or as I did here, add spots of red and green because of the Christmas theme.
Posted by Braynyac at 10/31/2011 No comments:

Roasting on an Open Fire 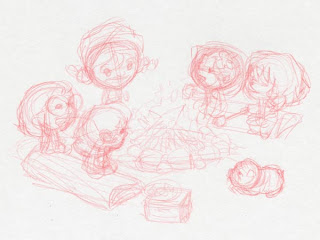 Elves Be Seeing You

Christmas must be nearing, because I drew elves to-day.
Posted by Braynyac at 10/17/2011 No comments:

Email ThisBlogThis!Share to TwitterShare to FacebookShare to Pinterest
Labels: sketches

Panel 2:
Close up of the trophy. Doctor Dockter's hands are on the bottom of the trophy. Some of the girls' hands are reaching in for it. The trophy looks weird at this close view. It has strange markings and skulls on it. The girls are grabbing the trophy, and a sort of electricity is shooting through them and crackling over them.

Panel 3:
They look like they are in agony. Doctor Dockter is behind them in silhouette, smiling. Closer in on one of the girls in mid transformation. Their clothes are ripping. They’re kind of hulking out.

Caption: But wait! A strange energy pulses out of the trophy...

— excerpt from the script by Merrill Hagan.


Some times when working from a script, I can just draw what’s written on the page. Most times, I pause and ask “what would work better?” As the editor-in-chief and publisher, I empower the artist (me again) to make changes - not changing the story but clarifying the story by shuffling or editing components of the script.

As an example, the actions described in panel 2 were just too numerous for a static image. It’s a close-up of the trophy and a bunch of hands (Dr. Dockter’s and the cheerleaders’). Added on that electricity effects crackling over the cheerleaders, whom would be indistinguishable if they’re only represented by hands.

So I instead introduce the electricity effects to panel 3, even though it would have carried into panel 3 any ways. The result is a more dramatic contrast between the states of before and after when the cheerleaders grab the trophy.

I chose to remove Dockter from both panels 2 and 3 since he commands 1 and returns in 5 with the beginnings of a declaration, making 2 and 3 entirely about the cheerleaders’ experiences. On the reader’s part, she/he assumes the all noted characters remain in play for the entire sequence even if they’re not all depicted in every panel. By that reckoning, the reader should also be assuming that Tuff-Girl, last seen on page 2, is still around seeing all this craziness.
Posted by Braynyac at 10/17/2011 No comments:

I’ve signed up for a Indy Press booth at next year’s MegaCon in Florida. Part of that package is an opportunity to advertise right on the MegaCon web site in the form of a button at the bottom of the page.

Set the date on your calendars. 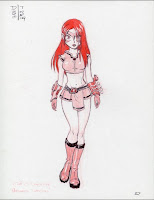 Starting with Speed Racer, Battle of the Planets and Space Battleship Yamato, Japanese animation has been an influence on my art. To be fair, the Walt Disney animated features and Warner Brothers’ “Looney Tunes” shorts were a bigger influences. So it’s probably a fair statement that my “Manga” style isn’t really like any Manga book you might pick up at your local comic shop, even when considering styles vary with the artist.

Here, Tuff-Girl’s gauntlet is an electro-magnetic sling. On her right wrist, I guess, is where she holds her steel shot to use with her sling.
Posted by Braynyac at 10/11/2011 No comments:

With a restaurant that operates sixteen plus hours a day including prep and closing and with a staff of close to a hundred crew members working overlapping shifts each of 4 to 8 hours long, the resulting combination of folks taking their breaks at the same time are at once random and limited. The break room setting became the most common device for mixing up the characters, exploring how the they might interact, especially when not dealing with the core “go to” characters.

In one such break room scenario, Monster sat with his imagined rival Even (Welsh Corgi, 5th appearance) with a discussion spurred by the appearance of Monster’s crush, Polly (penguin, 20). The subtext involved Evan, without realizing it, was the catalyst for Monster’s expressed insecurities. The failings of my Tags production schedule meant that there was only one strip prior to set up the Monster/Evan dynamic.

“The Apple Tree” dance was totally a high-school convention that had no counterpart in the operation of a major theme park or much less a restaurant operating within a theme park (which was where Tags was set).

There were a few strips where Monster was the quiet observer. Unfortunately, there’s no room in a daily strip series for a quiet observer unless he’s effectually a bit of property/ set dressing. If there’s one thing I like about this strip then it’s the opportunity to show Monster’s inner Charlie Brown.