Let’s cut to the chase.

I drew 12 pieces on last Sunday’s session of What Shall I Draw Today? Here are the top 3 liked pieces: 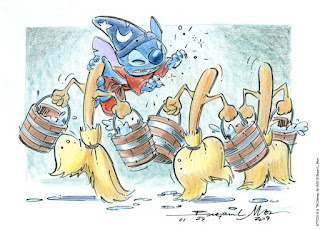 I call this “The Sorcerer’s Appren-Stitch.” The suggestion additionally requested for Stitch to be commanding the bucket brigade. If you know the segment from Walt Disney’s Fantasia, then that can only involve the magically animated army of brooms. Here, three bucket-carrying brooms stand-in for an army.

Stitch takes on Mickey Mouse’s costume including the iconic pointed hat borrowed from Yensid, the Sorcerer. It felt right to have Stitch climb up to the top of one of the brooms. However, what may not be a clear is the detail of having one of his 4 arms emerge from his robe to grasp the top of the broom, freeing his top two arms to gesticulate like an orchestra conductor.

#2 - Ant-Man and the Wasp at Disneyland (suggestion by @fletchthis) 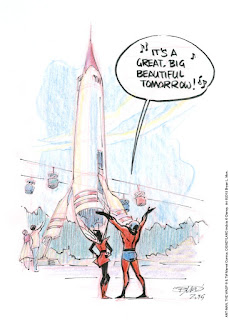 Both the designs for the tiny heroes and the famed theme park are 1960s era. I think it’s more fun to play with those nostalgic nods. For the characters, that usually means the costumes are simpler to draw, than, for comparison, their modern live-action film versions.

The Tomorrowland setting clicked for two size-referencing reasons. The first is the use of “There’s a Great Big Beautiful Tomorrow,” the theme for the old Disneyland attraction “Carousel of Progress” by the Sherman brothers. The second is the area’s tallest icon: the TWA rocket.

The scene behind the characters channels some of the John Hench concept paintings of the land without being exactly derivative. Possibly the perspective could have been worked out better. I traded off weird, but more accurate fish-eye distortion for clarity. 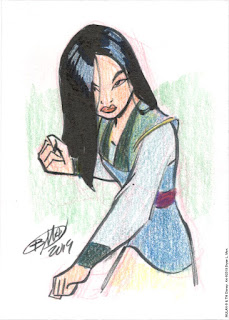 By a mere 6 likes, this piece places in the top three according to the tally of the first 30-hours. As time goes on, its possible that number 4, “The X-Smurfs,” may yet surpass this on likes counts.

To draw a different Mulan than what I draw at work, I looked this up on the internet, one of her costumes from the sequel. The distinction is subtle since it’s an amalgamation of two of her costumes of the original animated feature: 1) the green color palette of her “village” costume used primarily for dolls and other products; and 2) the silhouette of her blue, third act, Forbidden City costume.

There’s not much exemplary regarding story or pose, I don’t think. I probably underestimate the number of Mulan fans out there.

Here are the rest: 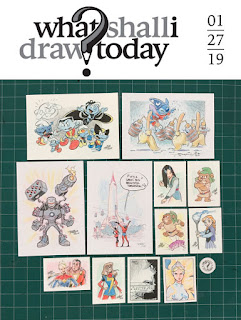 All 12 of these sketches are going into the batch of original art for sale at my table at my next comic convention, WonderCon, Anaheim.

Please check out my Instagram feed for more drawings and the next WSIDT: @monstergram7


THANK YOU for playing, liking and following.

Email ThisBlogThis!Share to TwitterShare to FacebookShare to Pinterest
Labels: Ant-Man, Disney, Disneyland, Lilo and Stitch, Marvel, mash-up, Mulan, sketches, The Wasp, What Shall I Draw Today

What Shall I Draw January 27th? 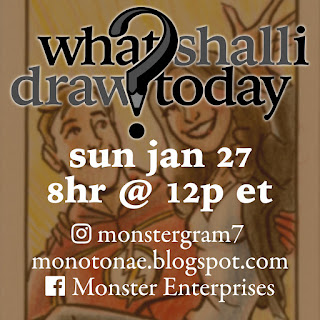 This coming Sunday, I will be asking “What Shall I Draw Today?” and I’ll draw stuff from the suggestions that come in from my social media touch points. Actually, I am asking that question right now through that Sunday.

It’s been nearly four months since the last session. Am I rusty? Am I even ready? I guess we’ll discover the answers together.

Please post your suggestions at any of the following social media spots where you find the above prompting image:

Email ThisBlogThis!Share to TwitterShare to FacebookShare to Pinterest
Labels: caricature, comics, DC Comics, The Flash, What Shall I Draw Today 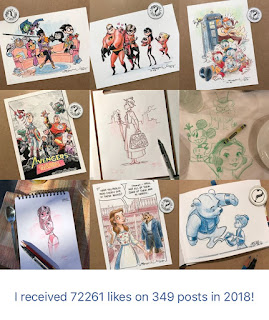 Early in December of last year, this nifty app tallied the best/ top nine of my Instagram posts in 2018 by likes, and above are the results.

The five full-color pieces are the top liked from their respective “What Shall I Draw Today?” sessions. “Genie Pooh” as an idea came from a WSIDT suggestion, but drawn in my Disneyland’s birthday autograph book. The three others are sketches drawn without occasion.

You can explore may thoughts on each* by clicking on the links below:

Beauty and the Beast
https://monotonae.blogspot.com/2018/06/what-i-drew-sunday-june-24th-top-3.html

Winnie the Pooh and Christopher Robin as Genie and Aladdin


*Winnie the Pooh and Christopher Robin and Genie and Aladdin: as a page from the sketch/ autograph book, I didn’t extrapolate on any of the individual drawings when posted here on monotonae. My thoughts: Possibly the most clever part of this is the use of a honey pot as a convincing stand-in for a magic oil lamp. Although always eager to be of help, Genie-Pooh would emerge from the pot much less explosively and less raucously than the Genie we are familiar with. Being a genie of very little brain, I would expect that his transformation would similarly less rapid-fire. If he could keep the pot with a bottomless supply of honey, then he’d most likely enjoy that. The Christopher Robin we know is more full of imagination rather than street smarts. He’s lucky that he found that magic pot.

In focusing this, my blog, as a portfolio sampler, I probably convey the impression that I draw ALL OF THE TIME. That isn’t true. This Instagram post (above) doesn’t help my protestations.

(top to bottom)
- A monster in a top hat. Monsters are allowed to dress-up a bit to eat out.

- Mickey Mouse. I don’t have the occasion at work to drawing Mickey in the current style used in the modern shorts. From memory, this is what I thought he looks like. I probably can’t do better today.

- Snow White, the little princess. Her design has lots of round shapes. That’s what makes her fun to draw.

I wonder if any of the wait staff kept these or other drawings from that evening.

Most of my sketchbooks consist of tiny thumbnail sketches of ideas before they vanish from my head, a form of taking notes with pictures. They are not intended for others to see and much less to judge. In other words, they are not Instagram-worthy. Some times I just try to draw something nice.

During one lunch hour, I drew Violet Parr the eldest child of Bob and Helen and for all intents and purposes a member of the super-hero family team, the “Incredibles,” of course, from the Disney/Pixar animated feature The Incredibles. She has the powers of invisibility and projecting not so invisible force fields. Yes, just like those of Marvel’s Invisible Woman, Sue Storm, and member of the super-hero family team created by Stan Lee and Jack Kirby, “The Fantastic Four.”

See elsewhere on the internet for the discussion of “The Fantastic Four” vs. “The Incredibles.”

Anyways, back to the drawing– To truly draw an invisible character is to not draw the character at all. Well, that isn’t any more fun for me than anyone looking at a blank page on Instagram. So, she’s partially not drawn, i.e. she’s partially invisible. At the same time, didn’t I merely draw a vignette of Violet? Sure, that’s fair.

Working in red and black, I recall someone queried why I didn’t color the black parts of her costume with black rather than the deeper shades of red. Speaking on something that I did twelve-months ago, it’s because as a character artist, I’ve become accustomed to focusing on developing line art. Tones and color become a secondary concern.

From the moment that I returned to Disney as a staff artist over five years ago now, I embarked on the quest of drawing as many different Disney characters as I could. It is a fairly impossible achievement, but it does give me something on which to focus instead of falling back on drawing more Disney Princesses.

Mary Poppins (1964) is not only a landmark film in the Disney filmography, but also in American filmmaking. It has a spectacular cast lead by Julie Andrews and Dick Van Dyke. The middle sequence of live actors on a jaunt through an animated world set new standards for special effects and continues to hold up next to today’s CGI confections. The songs are great - period.

Arguably, it is a bit too long if only because the fun has to come to an end to return to more meaningful story concerns like mending George Banks’ relationship with his family.

In this sketch, I return to overlaying Milt Kahl’s One Hundred and One Dalmatians styling to Ms. Andrews’ caricature - basically she’s Anita. It works for me because Dalmatians was released three years earlier, and one can do a lot worse than try to learn from Mr. Kahl’s strong draftsmanship.

The skyline is an afterthought. Were I to further develop it, I’d make it with more London flair.