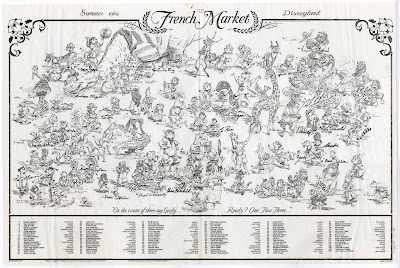 “The French Market Restaurant Cast Poster, Summer 1989”
Black Xerographic reproduction on white paper
91.4 cm x 61.0 cm (36 inches x 24 inches)
1989
Here is one of the biggest self-started projects on which I worked relating to my days as a Cast-Member (i.e. employee) bussing tables at the buffeteria restaurant “The French Market” in New Orleans Square, Disneyland.  Each of the 107 Cast-Members is depicted as her/his critter-caricature or as I coined, “critticature” (or crittature), which were originally developed for my fledgling comic strip series, “Back Stage,” of which I have discussed previously.

I don’t know if almost 22 years later I need to apologize for any of my critticature selections, but I can say that none of them were out of meanness. On the opposite extreme, none of my critticature selections very much gained me anything. I didn't even have much in the way of rules of going about it, save for trying to never use the same species or breed twice. Some were actually because they reminded me of an animal or cartoon of an animal. Some were merely alliterative with either their first or last name. The worst were because I had never used a particular animal before.

The poster was as big as Kinko’s copiers, at the time, could reproduce. I drew the original at 100% scale on illustration board as a single, sprawling piece of art and pasted on the names in the legend at the bottom. To my chagrin, the large copier’s rollers would not accept the large board, and I had to peel off the top layer. I ran off 200 copies for sale I guess. I would later frame the original and give it to the department supervisor to put on display in the office, where unfortunately it got water damaged when some pipes burst (or something). In all, I sum it up as some thing I did. I didn’t even seek official permission from the park to do it. I never followed up the poster with updated or expanded versions

Disneyland being a place of seasonal employ, for some on the poster, this was their first and last season at the Market, so I think I remember about half of these people, with a few more in the “oh, yeah” edges of memory.
Posted by Braynyac at 1/06/2011 4 comments: Links to this post