What Shall I Draw September 29th? “What Shall I Draw Today?” is a session dedicated to drawing suggestions culled from different social media portals (like this blog). Some times they’re themed, but true to the question that is the title, suggestions can run the gamut as wide and deep as the people tossing out the suggestions. My anterior motive is to build up a stack of original sketches to bolster my sales offerings at the few comic book conventions in which I table.

In the days in-between the monthly sessions, I can pick from the suggestion lists to inspire a daily sketch to be shared on Instagram. However, this spring and summer prevented me from doing many daily sketches.

So this approaching Sunday, for the last WSIDT session of 2019, I’ve taken 60 of the not-yet-drawn suggestions from this year that seemed like the most fun (and sellable) things on which for folks to vote. 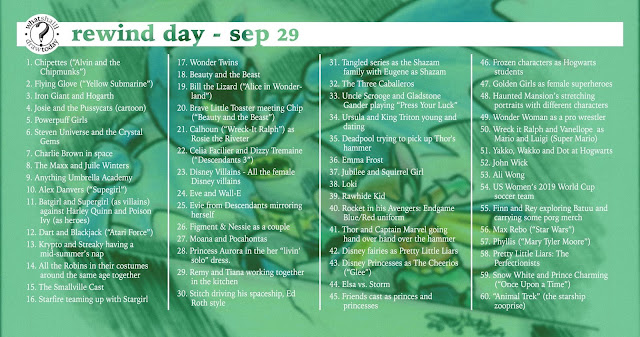 Vote for your favorite suggestions at any and all of the following social media spots.

Blog: monotonae.blogspot.com (here in the comments)

Email ThisBlogThis!Share to TwitterShare to FacebookShare to Pinterest
Labels: Batman, mash-up, sketches, Tom and Jerry, What Shall I Draw Today

Last weekend at D23 Expo 2019, Anaheim, CA, Disney celebrated the 30th Anniversary of the premier of the modern classic animated film, The Little Mermaid with numerous pieces of exclusive merchandise. From the Disney Store, selected art pieces were utilized for several different items.

My Mermaid art for the celebration was replicated twice. One was on one of a set of four ornaments, while the other on a large art piece printed on glass. 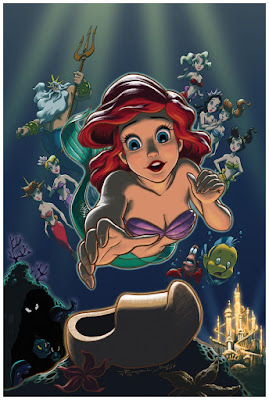 BEHIND THE ART:
In 2018, the Disney Store invited artists to contribute original art to celebrate The Little Mermaid’s 30th Anniversary, which officially lands in November 2019. Having been invited to contribute to similar calls for art, I am familiar that what general is liked best and then replicated on product are cute images of single characters with little backgrounds. My piece is not that, but a promotional poster for the movie.

Front and center is Ariel, the “little mermaid” of the story’s title, approaching a mysterious object that’s unmistakably from the human world - a shoe. That shoe is styled after the wooden clogs worn by Snow White in her introductory sequence of her own 1937 classic film. Faked perspective doesn’t quite hide the sense that it is a small clog. But I was only going to devote so much poster area to a clog.

Ariel is colored with the warmest palette and strongest white highlights. This palette choice and the mixed media treatment is inspired by the classic film poster work of Drew Struzan.

Ariel is encircled by her six sisters, her father and friends (from bottom left clock-wise): Attina, Andrina, King Triton, Arista, Alana, Adella, Aquata, Flounder and Sebastian. I cannot now remember my reasoning for the distribution of Ariels’s sisters. I did want them to each have different expressions. Some would rather have Ariel stay away from the alien thing, others are nearly as curious about it.

At the bottom right is King Triton’s underwater castle of his kingdom of Atlantica, made as bright and golden as I remember it from the movie. Compositionally, it may be too bright. The castle does contrast with the shadowy bottom left corner, from which peer the eels Flotsam and Jetsam as well as the glowing eyes of the sea witch, Ursula, further indicated by some of her emerging tentacles.

As an intended movie poster, you can sense that certain areas were left a bit void of details to reserve space for text and/or logos. That movie poster version never got completed.

As a total under-the-sea story, there is no room for Prince Eric or the seagull, Scuttle. 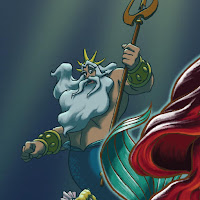 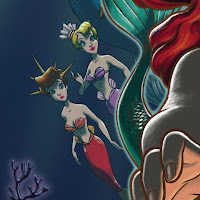 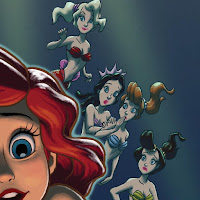 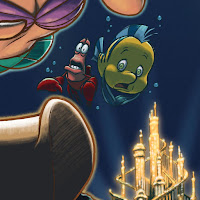 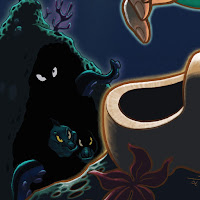 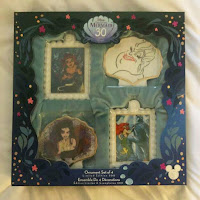