The third issue of Unstoppable Tuff-Girl is just a bit over 70% done. The independently created and independently to be published comic has been in production for over 15 months.

To all of our fans and followers who have been anxiously waiting for the follow up to the 2010 issue #2, we thank you for your extraordinary patience and support. Co-creator, Merrill Hagan and I especially thank you if we met you this year at WonderCon-Anaheim, Heroes Convention-Charlotte and/or Long Beach Comic Con where we had announced that issue number 3 was “almost done.” Don’t blame Merrill, however, the delay is all my responsibility.

If you’ve been a recent follower of my Instagram feed, @monstergram7, then you may have noticed that since October, there has been an increased postings of art from issue 3 and you may have gleaned that there has been a renewed push in the production of the book. Will that be enough to complete the book in 2017? The math of 15 pages in 27 days around the holidays and measured against my highest production rate says “unlikely.” But I’m not giving up.

I’ve certainly learned a thing or two in the last year+.

#1 – 48 Pages Is a Lot More Work Than 36 Pages. The interior page count is 48 with 4 more added with the cover, equalling 52 actual pages to be laid out and completed. The 50% increase was wholly a decision to reward our eager fans for the six-year wait. It turned out that four months producing 36-page issue #1 didn’t extrapolate well to 6-months projected for 48-new pages.

#2 – Time Management Does Not Scale Up. As a self-initiated project produced entirely outside of a 40-hour-a-week full time job, what happens scheduling-wise is other things get pushed aside or delayed to make room for this project. Projects done over a few days can be completed in this way fairly easily. As more time is required, eventually the delayed things cannot be delayed any longer.

#3 – Things Postponed Eventually Need To Be Done. Bills need to be paid. Things need to be cleaned and repaired. Cons need to be planned and attended (if it’s part of your marketing). And don’t forget that sleep need to be gotten. As time goes on, I cannot rely on all-nighters. All-nighters are certainly not something you want to pack into your production schedule of, say, more than three-months. In my case, after four months and certainly by April, after WonderCon, I was pooped and No. 3 just was’t going to be willed to quick completion.

#4 – Expect the Unexpected. In the back of your mind you know anything could happen to upset your plans, but you mostly hope that they are tiny anythings. For me, I had to deal with installing new floors in my condo.

The hiccoughs: a) as described above, I had three comic conventions where we had a table to offer our product. In each case they’re demanding attention for 3-4 weeks, in total that’s 9-12 weeks not working on the book; b) at least four, non Tuff-Girl art projects, two of which for Disney (the day job); c) Instagram, which has been a great boost in my meager marketing plans, but at the same time much of those relatively quick sketches have not necessarily been “working on the book”; and d) the unavoidable birthdays and holidays and an unexpected wedding.


For those wondering, the cover story featuring Merrill’s One-Armed Bandit adventure, is one of the stories still in production. The Wichita two-part story is also in production and reads better as two-in-one-book rather than breaking it up across two books. They being cover stories, and for other reasons, I had decided to have No. 3 be the planned 48-pages, and not scale down to say 36 pages.

Thank you again for your interest and patience. I’ll post an update in January, when I hope to have a definite print date.

“Disney Princesses as Marvel Avengers” was one of many suggestions made during on of this summer’s “What Shall I Draw Today?” sessions. It was a big challenge: 1) because there are 11 official Disney Princesses used in the franchise; and 2) because matching personalities, talents or other factors fairy tale heroines to adventure story super women didn’t come together naturally. So I didn’t draw is as part of that day’s WSIDT, but instead tackled a few group at a time  every two or three weeks.

From and original triptych, I expanded the series to five parts and include eight more “unofficial” princesses. All five color sketches are on my Instagram (@monstergram7).

For fun, I’ve composited the five into a panoramic action scene. If you were a reader in the 1980’s of Marvel Comics, you might remember the series The Official Handbook of the Marvel Universe whose covers could be tiled to create a larger whole image, more or less depending upon printing variances. The five sketches worked a little like that. The digital composite has a tighter layout than tiling each side-by-side.

And here’s the imperfect list of how I matched Princess to Super-Hero:

What I Drew Sunday – September 24th

Here are the top 3 liked pieces of the 13 I drew during the Sunday session of “What Shall I Draw Today?”

#1 – Rafiki and Zazu (Disney’s The Lion King): suggestions by @elijones94 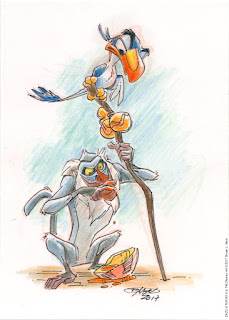 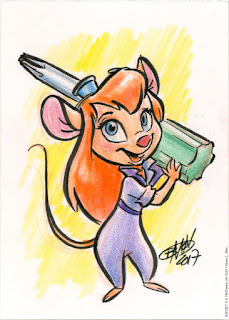 #3 – Merlin and Wart (Disney’s The Sword in the Stone as squirrels): suggestion by @art3mis8182 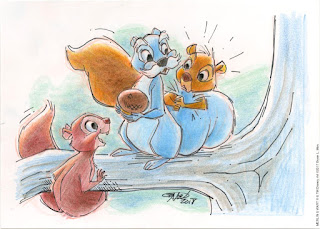 Yes, it’s Disney across the board! 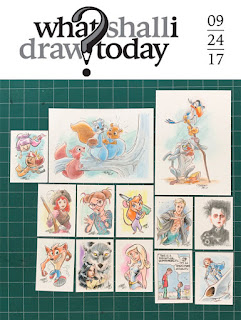 You can check out them all on my Instagram feed: @monstergram7

All of these drawings  are going into the hopper of original art for sale that I have at the few comic convention appearances.

Thank you to everyone who pitched drawing suggestions.
Thank you for following and liking.

“Leftover” suggestions may yet be drawn in the next few weeks. I may even pick from the suggestions taken since January of this year.


The next official WSIDT session will be held January of next year.

Email ThisBlogThis!Share to TwitterShare to FacebookShare to Pinterest
Labels: animals, Chip n' Dale's Rescue Rangers, Disney, The Lion King, The Sword in the Stone, What Shall I Draw Today

What Shall I Draw September 24th? 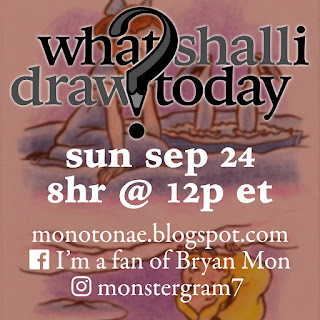 In less than 1 week, I will be conducting this year’s last edition of “What Shall I Draw Today?” - eight hours devoted to drawing other folk’s topic suggestions. On of those suggestions could be yours. All previously pitch suggestions will be cleared from the virtual suggestion box for new ones.

• Blog:  monotonae.blogspot.com (this thing here) in the comments.


For more information and FAQ’s, please check out the WSIDT tab above.

Don’t miss out on this last WSIDT session. The next one won’t happen until 2018 after a 3 month break.

Email ThisBlogThis!Share to TwitterShare to FacebookShare to Pinterest
Labels: Disney, What Shall I Draw Today

Here are some of the commission sketches that I did way back at this year’s June Heroes Convention held in Charlotte, North Carolina:


A couple of Disney girls
(true to my brand):

Some things from
Movies and Television:

and
an octopus
Posted by Braynyac at 9/16/2017 No comments: Links to this post 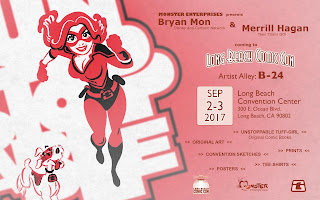 Long Beach Comic Con
is happening this Labor Day weekend in Long Beach, CA (naturally)!
If you’re attending, why not stop by and see Merrill and myself? 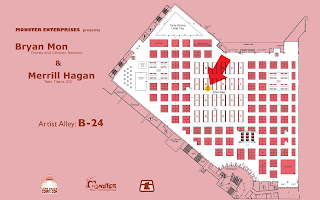 Merrill Hagan @merrill_hagan of course is a writer for Teen Titans GO!, both the Cartoon Network series and the DC comic. Come over early if you’re a fan.

As with the cons earlier this year, we’ll have a limited number of ashcan previews of Unstoppable Tuff-Girl #3 - still in production.

As a rare treat, I’ll have some of Juan Ortiz’s old Silver Comic issues and branded items for sale. 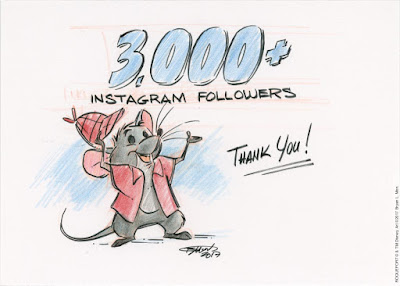 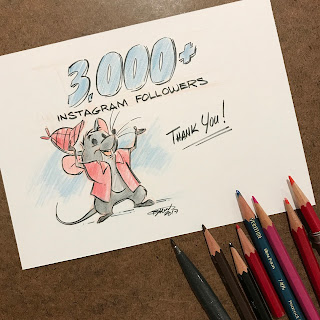 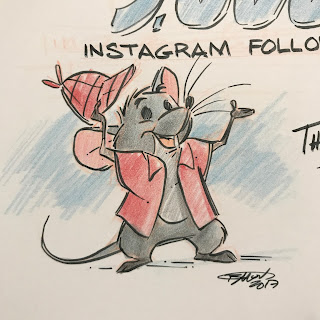 What I Drew Sunday – August 27th

Here are the top 3 liked pieces of the 12 I drew during the 8 hour Sunday Session of “What Shall I Draw Today?”

#1 – Flynn Rider (Tangled) and Aladdin teaming up: suggestion by @sisicake and in part by @anissa.arts02. 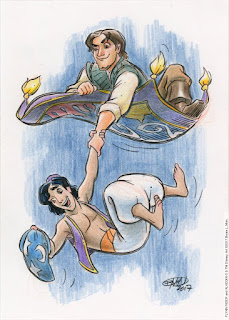 #2 – Winnie the Pooh: suggestion by @hcdisney_art and in part by @elijones94. 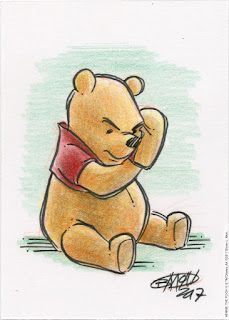 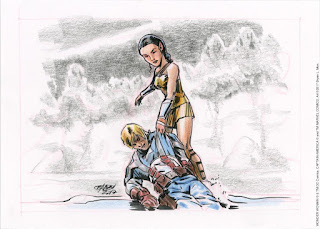 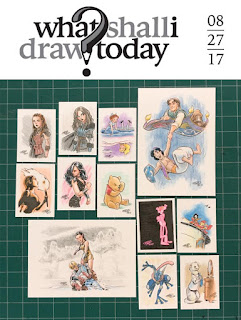 You can check out all 12 on my Instagram feed: @monstergram7

All of these drawings and more original pieces of art will be for sale at my Artist Alley table at this coming weekend’s Long Beach Comic Con. Details to follow.


Thank you to everyone who pitched a drawing suggestion or two or more.
Thank you for following and liking.

“Leftover” suggestions may yet be drawn in the next few weeks before this year’s last WSIDT happening next month.