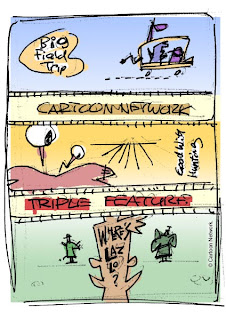 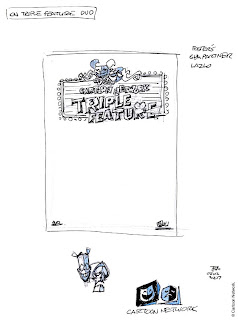 Concept B.
Rollerball ink and pencil on copier paper.
2007. 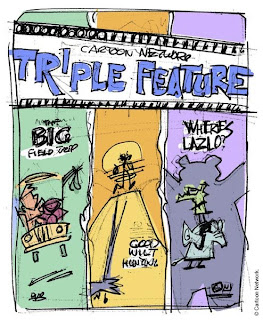 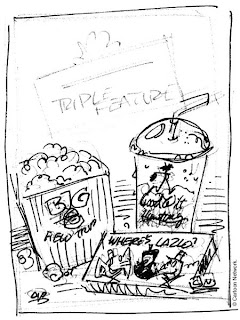 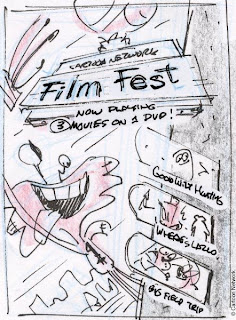 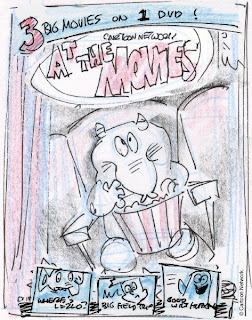 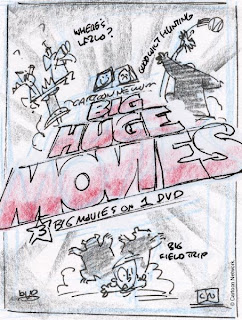 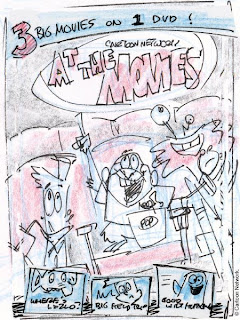 This was an exploration as a potential product. Q1: Does three movies on one disc equal "value" or does it imply less-than spectacular fare? Q2: Could one earn three times as much money with three separate DVDs, or would the popular one (Foster's) sell relegating the others to glut retail shelves?

Then there was the creative explorations like these visual as well as naming the darned thing as the DVD had the possibility of being the first in a line.

I like that ones that down played character details including pseudo Saul Bass silhouettes. However, it is probably too sophisticated a concept for the kids' video shelves.

Concept G features Fred Fredburger, who is a "Billy and Mandy" character, that absolutely does not appear in any of the contained movies. The bonus feature for this concept was to have the short-attention spanned Fred do audio comentary for the three movies. Yeah, this was at a time when the network was too much in love with the little, pistachio-colored, elephant guy.

Well, the DVD didn't go past the conceptual stages. "Good Wilt Hunting," however, was pressed as it's own DVD movie, although I don't know where one would get a copy. It's not on Amazon.

"Foster's Home for Imaginary Friends," "Camp Lazlo," "My Gym Partner's a Monkey" and all related characters TM and © Cartoon Network.
Posted by Braynyac at 4/30/2009 No comments: Links to this post 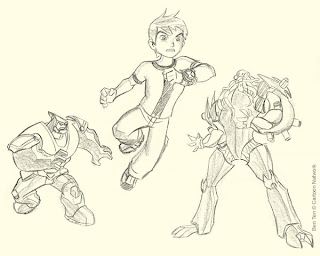 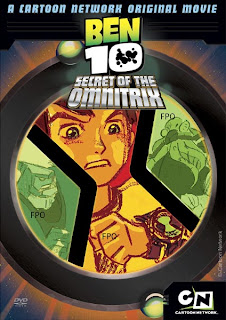 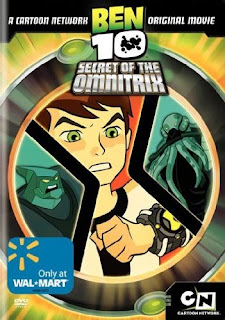 "Ben 10 Secret of the Omnitrix" final DVD cover, with "Only at" sticker.
Digital illustration by Brian McGee, Design: Petrika Janssen.
2007.

"Ben 10 Secret of the Omnitrix" (a.k.a. "Ben 10 SOTO") is the movie that capped the popular "Ben 10" series. Naturally, it was released as a commercially available DVD like rest of the series.

I've drawn lots and lots of Ben 10 art now, continuing into "Ben 10 Alien Force," and I think I've just about exhausted compositions getting his left, Omnitrix-wearing arm high and near the face. Then there's the behind-the-scenes drama of whether or not certain expressions are heroically determined and which are just angry. Otherwise, I like my job.

"Ben 10," all related characters and the Omnitrix symbol TM adn © Cartoon Network.
Posted by Braynyac at 4/30/2009 No comments: Links to this post 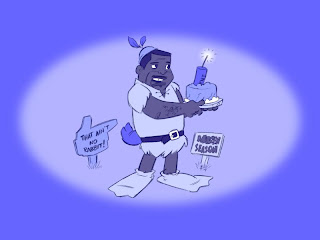 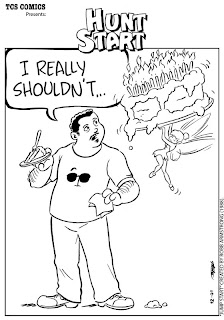 b: digital mixed media with scan of India ink drawing, 2006. 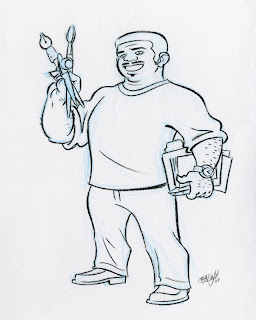 Darren Hunt was the first on staff character artist at Cartoon Network, Trade Creative Services (TCS) group, and, as I understand it, always a snappy dresser. Previously, he was a character artist with Disney's theme park merchandise group in Florida.

As an artist, he was cast on assignments playing towards his strengths with dynamic comedic characters. Outside of publishing (comics and coloring activity books), he probably worked on most, if not all, of the "Dexter's Laboratory," "Johnny Bravo," and "Ed, Edd n Eddy" ever to reach the consumer public. Of the little I saw, he was one of the best traditional inkers I have personally encountered. Now days, however, most commercial character art is inked digitally - again excluding publishing, but mostly due to volume.

He was always looking to find a way to improve the way we did things at the network, including experiments with 3-d computer modelling programs, but it was close to impossible implement huge changes when most of our duties was quick turn-around 2-d work.

a) A birthday drawing which is half the joke. The other half had Merrill in a rabbit costume because he share the same birthday. The two together are a play of Chuck Jones' classic Bugs Bunny/ Daffy Duck feud. [***--]

b) A birthday drawing done in the style of Robb Armstrong's "Jump Start." Tinker Bell is one of his favorite characters. [**---]

c) With this previously unpublished drawing done for a cubicle shingle/ name plate, I found that Darren was generally dissatisfied with my charicatures of him. What I saw as barrel chested, he saw as fat. Some one once said that in the TCS movie, Darren should be cast with Billy Dee Williams. [****-]
Posted by Braynyac at 4/25/2009 No comments: Links to this post 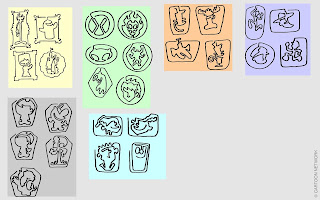 Digital color over scans of ink on paper.
April 2007.

Some sketches exploring possible wire paper clip designs as premiums. For each: put pen down and go, then stop. A lot of these were too complex - too many turns and/or turns which were too sharp - for something that would be smaller than 1.25 inches.

About 10 designs were made. Clips were colored by the show they represented. 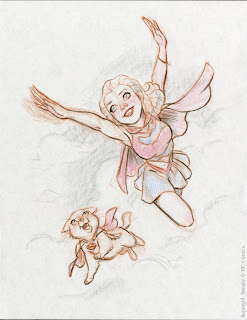 This is another drawing of Supergirl that I came upon going through a pile of papers. This one done in 2003, in a not so animation friendly style - look at the hair detail. The forced perspective on her hand is a little outrageous, and the huge red "S" on blue top is a thing for fashion ridulcule, but on a whole, I think, a nice drawing. Cataloging my drawings is a bit haphazard - trying to hold to a chronological sequence with the occassional un-catalogued find tempting that very system. And if that find is un-dated? Forget about it.

This one features Streaky, Supergirl's distinctly lightning bolt marked super-pet. Streaky first appeared in the February issue of Action Comics #261 in 1960, nine months after Supergirl's own first appearance in comics. Naturally, if Superman had a super dog in Krypto, then his female cousin should have her own super sidekick/pet.

Streaky's origin, as told in that first issue, differs from that of the other aforementioned super's in that rather than being an immigrant from the planet Krypton, the Earth cat gains power from exposure to X-Kryptonite. Kryptonite is well-known as being radioactive elements originating from the exploded planet Krypton harmful to Kryptonians. X-Kryptonite was created through Supergirl's experiment on a chunk of the meteor in her attempts to counteract its harmful effects. Failing, she super-tosses the sample into the woods.

Ha! That's classic sci-fi storytelling. You've got super-powered girls and cats, mysterious radiation and its incredible side-effects, and not least of all, a young heroine with enough scientific competence to boldly experiment on the hazardous stuff (in a small chemical laboratory in an American mid-west orphanage!) who turns around and carelessly disposes of the still radioactive rock to conveniently become the catalyst for comedic adventure. My enjoyment of this science-fantasy to-day is slightly marred by my annoyance to Streaky's thought bubbles.

Supergirl, Streaky © DC Comics.
Posted by Braynyac at 4/13/2009 No comments: Links to this post

Email ThisBlogThis!Share to TwitterShare to FacebookShare to Pinterest
Labels: Supergirl

August 02, 1993: Somewhere in Monster's subconscious mind, he continues to have pointed conversations with himself; two sides of one being: the impulsive id represented by Monster himself, while the logical side is represented by the floating brain, Brayn. Enter Polly (penguin). Let the awkwardness begin.

August 03, 1993: Back in the real world, the softball game continues, with the players making good use of the unconscious Monster. Meet John (dog) and Al (dog with camera) sharing a brew or two with Monster. Heidi (gopher) and Polly look on.