I slated last Saturday’s What Shall I Draw Today? (a.k.a. WSIDT) as “DC Comics Day.” The suggestions did not disappoint.

Here are the top 3 liked piece of the day. 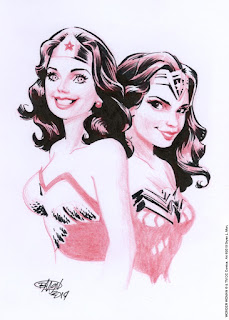 Since it was “DC Comics Day,” of course these two are depicted in their respective Wonder Woman costumes. The art is a bit caricatured, which is a safety net for if I fail to quite capture the likenesses in given the time pressure that I place on myself.

I chose the limited palette of black ink and red pencil, in part, because there was something I found interesting in the initial red pencil drawing.

This was my first attempt to draw Ms. Carter. This may be the fourth attempt that I’ve tried to draw Ms. Gadot’s likeness, caricatured or not, and I’ll say that I’m getting better. 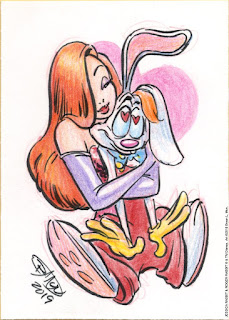 As the singular non-DC Comics piece of the day, this suggestion was a tribute response to the news of the death of animator and director of Who Framed Roger Rabbit, Richard Williams. The suggestion presented the option one of the other, but there is always more story opportunity when you have at least two characters to work with.

To my recollection and at least to recent memory, this is the first time that I’ve drawn the couple, rather than either alone. Regardless of the occasion, I think these are my best drawings of either Jessica and Roger to date. I think I’m more comfortable with their designs enough to stray away from literal copies of movies stills and infuse them with a bit more design refinement – things like balance, line of action and clarity of silhouettes.

Many of my tributes to the more behind-the-scenes talents, focus on the beloved characters and creations rather than portrait drawings or caricatures. It’s pretty much implying, “if you like these (characters), then you’ll care to remember the life and work of this person who helped create and bring them to you.’’ 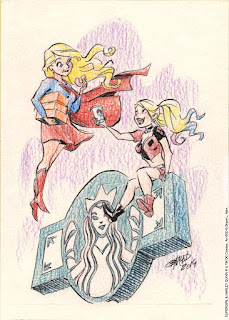 As an addendum to the suggestion was “Maybe they can have Starbucks or something?” Not wanting to put more brain power in to it than necessary, the two are at a coffee shop. The logo is, however, inspired by the Starbucks logo, featuring instead a stylized Mera.

Not being a coffee drinker myself, I took the opportunity to have one of them, Supergirl here, enjoy some doughnuts instead. It was a choice of either doughnuts or ice cream.

Compositionally, once I decide to have Supergirl’s cape blow in the wind in a specific directions, then other things like hair need follow. It was fortunate, then that Harley’s pigtails didn’t have to be drawn across her face to the left. Her pose and position wasn’t planned to allow space for back-swept pigtails.

It’s interesting to try to track which ones receive the most likes. Early on, both “Tom and Jerry” and “Morpheus and Death” were in among the top 3.

Her are the remaining 6 of the 9 sketches: 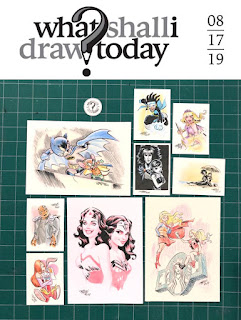 All original pieces of art to be sold at my next tabled convention appearance - CTN Expo, Burbank in November.

The next WSIDT is scheduled for Sunday, September 29. It will be last WSIDT of the year.

What Shall I Draw August 17th? 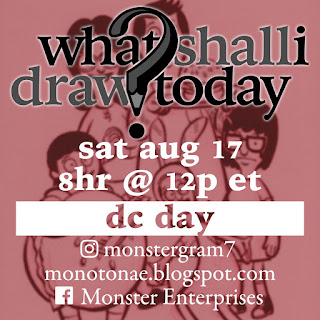 From now through the evening of Saturday, August 17th, I’m accepting new suggestions for things to draw over an hour dedicated to drawing all things DC Comics related.

If it feels like I just ran this sort of things, then you’re not wrong. This month’s session was moved a week earlier because it conflicted with the weekend of D23 Expo. Further, this time it’s happening on SATURDAY rather then Sunday to work around other things happening.

Per usual, the hopper of suggestions will be emptied of all previously pitched suggestions. I will be choosing from new suggestions made from now until the end of Saturday’s WSIDT. Start posting your suggestions at any of the following social media spots where you see the above prompting image.

What’s more, I will only be choosing DC Comics related suggestions: Superman, Wonder Woman, Batman, Swamp Thing, etc. In fact, as I’m still engaged in a big project otherwise, the chances that non-DC themed suggestions popping up on my Instagram in the weeks following are unlikely. So you may as well use your time and creativity on DC stuff.

And What does “Bob’s Burgers” have to do with DC? Nothing. I just traditionally use the fourth-top liked piece from the previous WSIDT as the background image of the prompting image.

Email ThisBlogThis!Share to TwitterShare to FacebookShare to Pinterest
Labels: Bob's Burgers, What Shall I Draw Today 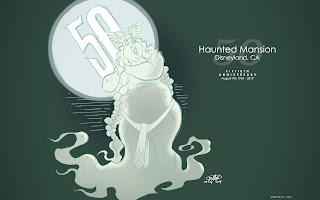 The attraction features a pair of opera singers, although I chose to only depict the female member. In the original vignette, conceived by Disney Imagineer Marc Davis, her male companion stands on her left side and is thin, wearing a stage costume version of nordic/viking armor. Her long, left braid is draped over her companion’s chest and over his far shoulder.

The classic attraction has many vignettes and characters that are well-known even to casual Disney fans who have yet to make their first visits to a Disney Park. The trio of hitchhiking ghosts may be the most well-known. I choose for this anniversary tribute something a bit less well-known and then for simplicity to only depict half of the couple. To make her appear more ghostly, I drew her lower body transition to wispy, smoky trials. This is a departure from the look of the Mansion’s ghosts both from the audio-animatronic versions of the attraction and from the Marc Davis concepts. 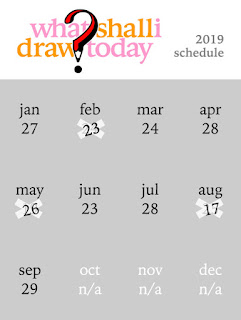 Due to conflicting schedules, the next session of What Shall I Draw Today? will be moved up:

Email ThisBlogThis!Share to TwitterShare to FacebookShare to Pinterest
Labels: What Shall I Draw Today
Newer Posts Older Posts Home
Subscribe to: Posts (Atom)