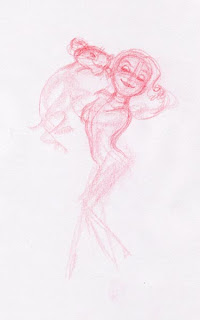 An often asked question to motion picture directors and actors goes along the line of "is there a point in the production when you know if you're making something special?" For that matter, something of a dud? Which makes some sense given the large number of people involved. I don't recall that query posed much to artists, but maybe I'm not reading the right things.

Well, on this piece, THIS is the point that I felt that this was going to be a good drawing. The expressions are pretty set, Tuff-Girl's torso has a nice arc and twist with enough of her legs posed to balance the figure, and the dog, Wichita, is far enough from TG to extend her neck while leaving space between her tongue and TG's cheek creating anticipation.

I use cooking as a better analog for creating art. The choice to stop the drawing process to scan it was akin to stopping beating the eggs only to come back to it and wondering, "Now, where was I? Did I chop the garlic yet?"

Like many things, some thing can go wrong at almost any stage of the process, but I can say that on this piece this is where the process started to flow - where my drawing decisions were more instictual becasue "it looked good" rather than "in order to accomplish 'B', I need to do 'N' and 'Q'." 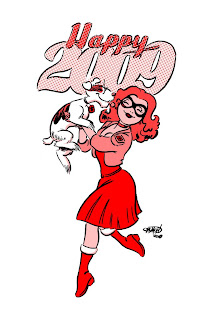 One last post before the new year.
Posted by Braynyac at 12/19/2008 No comments: Links to this post

Something There That Wasn’t There Before 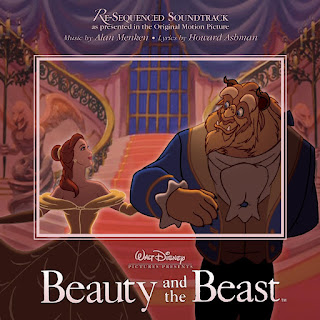 The re-sequencing project of Disney's The Little Mermaid soundtrack was practice for this one, Beauty and the Beast. The image here is from a scene shortly before the famous ballroom sequence. Mrs. Potts and Footstool were digitally erased, and I re-drew and re-colored Belle and Beast for improved resolution.

In 1991, I was was swept up in the renaissance of animation which began with The Little Mermaid. I had at the time, and still own, so much B&B merchandise, it was ridiculous. Working at Disneyland, I easily found myself among other B&B fans. The soundtrack, beloved as it was, suffered from the flaw of having its tracks out of order, with the songs grouped together in the beginning and the orchestral score tracks grouped at the end.

17 years later, I get to correct that error. Well, it makes me happy, at least.

Track 4, "Wolf Attack" is taken from the four disc set of Alan Menken and Howard Ashman music, "The Music Behind the Magic."

Also from that collection is track 15, "Transformation #2," replacing the similarly named track on the original soundtrack. This composition, however, matches the cue in the final film. In the notes, Menken explains that he composed "countless demos of underscore for this moment when the Beast 'dies' in Belle's arms." The final version in the film is more somber.

Also of note, about 2 minutes and 17 seconds into track 9, "West Wing" is a cue that comes from the scene beginning in the tower just after Maurice is shuffled away from the castle in a walking carriage and through Beast leading Belle to her room. Had I fancy audio editing tools, I might have separated the two cues, but that second part of track 9 does finish off the first rather well; working as underscore, hardly being strong enough to stand on its own.

As I had done on The Little Mermaid, Re-Sequenced, additional bonus tracks fill out the CD. One of the more interesting that I found is an orchestral version of "Beauty and the Beast" in 3/4 time, like a waltz. In the film, Mrs. Potts sings the song in 4/4 time, but one would assume that Belle and Beast are waltzing. This is another item proving the strengths of the story to overcome such annoying continuity details, like double hinged front doors, temporally incongruous tower-shaped stacked wine glasses and the prince/Beast not having a name.

July 12, 1993: Brayn the floating brain (and spinal cord) proves that some times being smart can lead to over thinking a problem, even a simple mnemonic device to help him keep track of his mental responsibilities.

July 13, 1993: And in the real world, Chekov (dragon) and company debate on what to do with the unconscious Monster. Corina (poodle) makes her second appearance. Polly (penguin) gets hit with an information brick. Murray (cheetah) re-states the obvious. That bush in panel two looks kind of odd and unnecessary.
Posted by Braynyac at 12/13/2008 No comments: Links to this post

Maybe There Is Something the Matter with Me 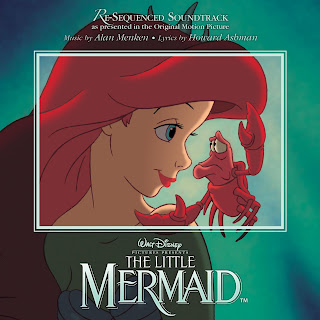 About a year ago, I designed a cover and packaging for an audio CD of The Little Mermaid soundtrack, with the tracks set in the order that they are featured in the film. Not happy about the final image resolution, I re-drew the characters of an image that was originally scanned from the Sotheby's auction catalog of the art from the film. The digitally colored new character art was then pasted over the old image.

I also expanded the CD booklet from four pages to eight pages; from only featuring the track listings and a time bar indicating track placements, to now include song lyrics and extended film credit list. The original 1989 soundtrack was released with out song lyrics or many of the booklet information with which you now expect a CD to come.

And I can listen to the soundtrack in the proper order with bonus tracks on my iPod.

... Wait a minute.
Why did I make CD packaging?

There Are Monsters and There Are Angels 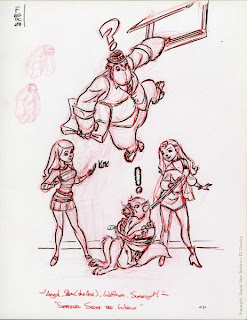 For no apparent reason, I've been drawing more Supergirl stuff in my sketchbook these last couple of months, that may yet turn into some sort of story pitch.
Having settled on this long haired, puffy sleeve design, my attention has turned to the second major aspect of my ideal Supergirl comic book or cartoon series: guest stars.

Here the Maid of Might meets detective duo of Angel and Sam Simian, apparently at the end of what one must assume was a comical chain of events involving a mis-behaving wolf-man.

The unusual pair of Angel and the Ape had a short running series in the late 1968-69 (7 issues), a shorter series in 1991 (4 issues) and a third as recent as 2001 (4 issues)*. I've not read either of the last two series, but the 2001 series featured Howard Chaykin as writer and covers by Arthur Adams. It's the first series that I'm familiar, with a tongue-in-cheek tone, loaded with puns and convenient situations to have Angel in a mini skirt. It features the artistic talents of Wally Wood (EC Comics, MAD Magazine) and Bob Oksner (inker on Supergirl; "Ah ha" you may have said). This type of humor plays better for me with snappy animation, so the bigger payoff for me are the Oksner covers and the segments featuring at least his inks if not both his pencils and inks.

With that connection, the proper story featuring these characters MUST involve the ageless story gimmick of (Shakespeare liked it) the mistaken identity. ...and hilarity ensues.

* as researched in the Comic Book Database (http://www.comicbookdb.com/index.php).

Supergirl, Angel, Sam Simian © DC Comics
Posted by Braynyac at 12/06/2008 No comments: Links to this post