For every comic book convention at which I have a table, I compose a marketing image for a limited edition commemorative print. At least I’ve tied for every show. For WonderCon, Anaheim 2018, I finally brought to completion an idea/ theme floating around for a few years inspired by old orange create label art.

Back in 2014, I had wanted to produce such a piece more based on classic painted advertisements, a la Sunmaid Raisins, Land-O-Lakes Butter and similarly Quaker Oats and 1950’s - 60’s Coke-a-Cola ads. Alas, the project on a whole always seemed to be too complicated to achieve the level of rendered finish I had envisioned. The cartoony style used for Wichita’s stories, allows for the rendering not to approximate photographic lighting and shading.

For Heroes Convention 2016 in Charlotte, NC, is did produce a Coca-a-Cola ad inspired piece similar to what the orange crate style would be. Strategically, the image has a flat color field for a background, and it’s sans Wichita. Secretly, with the print image crop to her hips, the digital painting wasn’t completed any further down, and to this day I have yet to finish it.

The significance of this theme, of course, is that the host city, Anaheim, CA, is nestled in Orange County. Before Disneyland settled in the city, Anaheim was a farm community of orange groves. I usually include neither the convention name nor the host city in the print design, adding those only as small super-imposed type with the “Unstoppable Tuff-Girl” logo. As a rare divergence, “Anaheim” is added to one of the 3 crate labels, which personally means “yes, finally I did this for Anaheim.” Said crates, are more the size of those used for strawberries, with more accurate common designs being much taller with the labels on the short, handle ends and not the long sides. So much for, drawing them by memory.


Regarding Tuff-Girl’s costume, it’s consistent with the theme. Tuff-Girl does go through many costume changes. I doubt, however, that she does much monster butt-kicking in this ensemble, even with her practical leather work boots.

The mountain range is modeled after the San Gabriel mountains north of Orange County.

What I Drew Sunday – March 18th

There seems to be a pattern of the larger, more complicated drawings ending up in the top liked spots during the What Shall I Draw Today? sessions. This Sunday’s was no exception.
Here are the top three:

#1 – The Real Housewives of Disney: suggestion by  Kinzey Freels 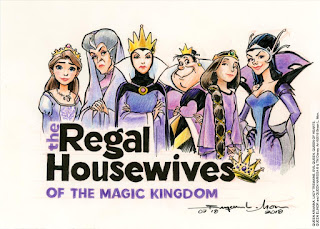 Frequently entertained by puns, I replaced “Real” with “Regal.”  And instead of “Disney” in the title I went with the all-Disney encompassing location of “The Magic Kingdom.” In selecting the characters, each of the six had to be a wife and either or both of the following: a) of royalty; and b) a significant supporting character.

Because pickings were slim, Lady Tremaine gets a spot by being important to Cinderella’s story and probably of high standing in the kingdom if not quite royal.


#2 – Belle and Beast: suggestion by eddysbrothersgf 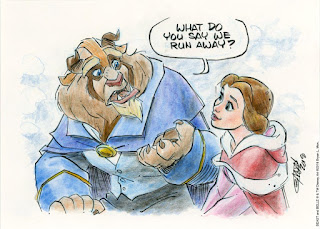 This is an amalgam of the character designs from the classic 1991 Disney animated feature film and a moment from the 2017 Disney live action treatment. The costumes are inspired by elements from both.

I’m afraid that the Beast doesn’t quite have the expression conveyed in Dan Steven’s line delivery. Here he seems to either be in mid-sneeze or a gnat has flown into his mouth. 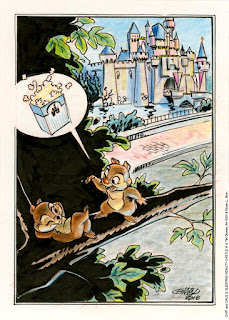 Here’s an idyllic scene in the hub / center courtyard of the Anaheim theme park. It’s idyllic if for no other reason than the scarcity of other guests. But that’s pretty much how the park appears when Disneyland was portrayed in comic and coloring books.

Why doesn’t Dale say the word “popcorn” but rather has a stylized 1960’s box of popcorn drawn? In some way, it made more sense to me that way having opted to show neither a popcorn cart, nor Donald Duck with a fresh box of buttery fluffiness.

As the final piece drawn that Sunday, I rushed to keep details to the essentials. And I missed the opportunity to sneak in a hidden Mickey.


And here are all eight pieces drawn that Sunday: 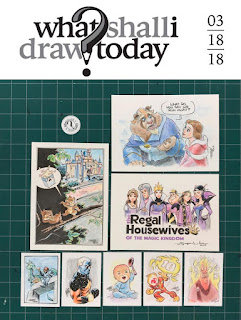 Yes, only eight done, and that’s including going overtime by nearly an hour. That’s what happens when I draw scenery and multiple character pieces.

You can see each one more clearly on my Instagram, @monstergram7.

All of these and more original pieces of art will be for sale at my Small Press table at this weekend’s WonderCon, Anaheim comic book convention. SP-10
See my announcement post for information.


Thank you to everyone who pitched drawing suggestions.

Thank you for liking and following


The next session will be late April.

Email ThisBlogThis!Share to TwitterShare to FacebookShare to Pinterest
Labels: Beauty and the Beast, Belle, Chip n Dale, Disney, Disneyland, villains, What Shall I Draw Today

What Shall I Draw March 18th? 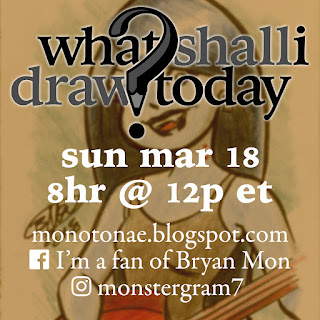 The March edition of What Shall I Draw Today? will be happening a week earlier than originally planned and announced so as not to coincide with WonderCon weekend.

You may post your suggestions at any of the following places where you see the prompting image above:

• Blog:  monotonae.blogspot.com (here in the comments)


Since this is a pre-con WSIDT, and all drawings will be for sale at said con, some of you planning on attending WonderCon may think you can strategically toss in a commission disguised as a WSIDT suggestion. To that I’ll say that I neither promise to draw suggestions by WonderCon attendees nor will I reserve drawings. I will, however, be taking commissions at WonderCon.

As always, you may find guidelines and Frequently Asked Questions at the WSIDT tab above.

Email ThisBlogThis!Share to TwitterShare to FacebookShare to Pinterest
Labels: Adventure Time, Cartoon Network, girls, sketches, What Shall I Draw Today 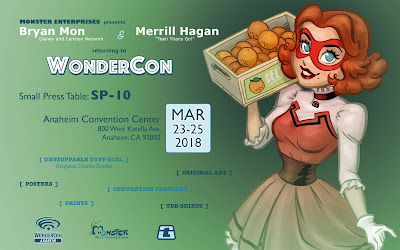 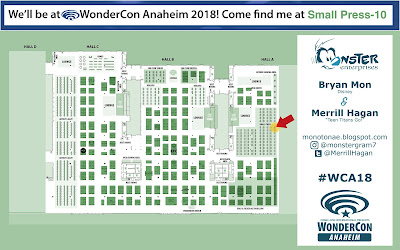