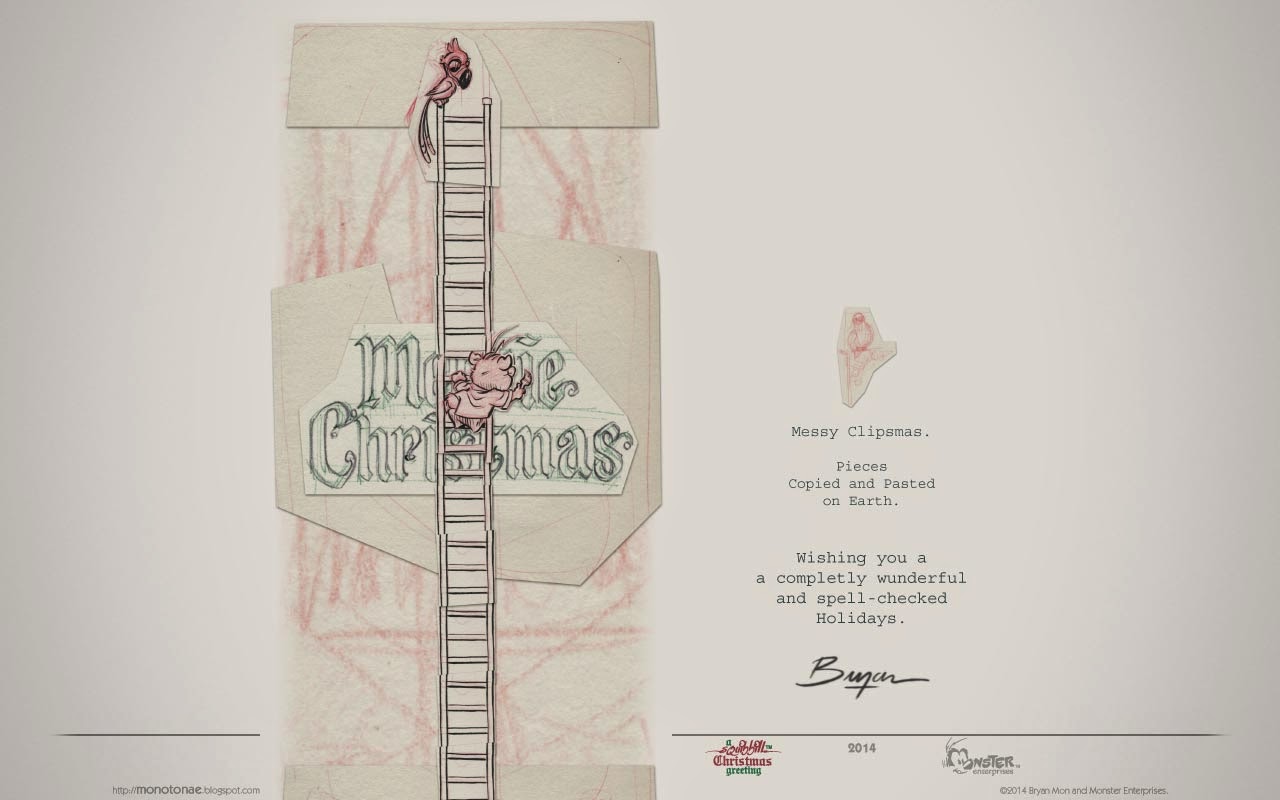 I’ll be back in February 2015
with more newness right here
at monotonae!

August 31: I reckon that this set up and punch line must have been used in The Wonder Years, The Brady Bunch or some such family situation comedy. Oh well.

Not that it matters to what’s happening in the strip, I’ll talk through the visual details.

1) “Happiland” is, of course a stand-in for Disneyland and the themed amusement park in which the TAGS characters work. This I’ve mentioned as necessarily informative, but this is the first time I’ve shown the park’s logo here on a monument marquee*. In fact, I hadn’t a logo designed until knowing that these two characters would be sitting outside the Park and the layout seemed to necessitate a sign of some kind.

2) A monument sign for Happiland, even as a location specific, non-marquee one, doesn’t/ didn’t stand-in for any real-life feature. I just seemed appropriate - cozier, if that makes sense. It’s kind of like the one at the Walt Disney Studios at the Buena Vista Street entrance (Google it if you must). Saying that, however, is misleading, because I’m sure I didn’t have that in mind.

3) The building in front of which Monster and Rodney are seated, IS a stand-in for Harbor House, the Cast-Member (employee) entrance off of Harbor Blvd. At the time, Disneyland had mechanical time clocks, and each employee had paper time cards. Upon arriving and departing work, each Cast-Member had to get their cards time stamped in Harbor House. As a physical location that was the sole entry and exit point for a majority of Cast-Members, Harbor House was THE location of convenience to meet other Cast-Members, especially when cel-phones weren’t common. Now the process is digital with magnetic stripped I.D. cards.

4) In the right most section of the building sits a security officer.

5) The silhouette to the left of the marquee, would be a topiary of the Park’s raccoon mascot. Like the monument sign, the topiary more has a counterpart at the Disney Studios than the Park.

September 1: This is absolutely all soap opera stuff. With TAGS lacking the promise of, or I not having the commitment to making it become a long running series, teasing out Monster’s crush seemed a poor plan and instead I thought it ought to be resolved in some way.


*A little history: In 1994, the second marquee of blue and pink with white letters had stood already for five years off of Harbor Blvd. in Anaheim at about featuring an electric message board. Five years later, b.t.w., that one went away with the construction of Disney California Adventure. The first marquee for Disneyland had large individually boxed letters and stood along Harbor Blvd. through a few color palettes beginning in 1958.

Rodney, African Lion, makes his 6th and 7th appearances in these 2 strips. 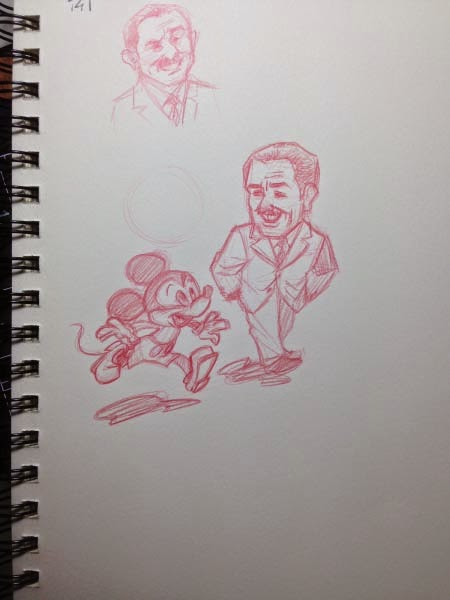 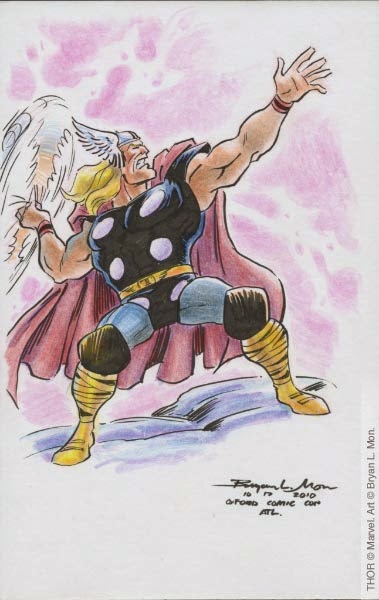 I drew this at a local comic shop and as inked art with basic red and blue coloring blocking was part of my collection of art-for-sale for several years. This year I finished it with color pencils. 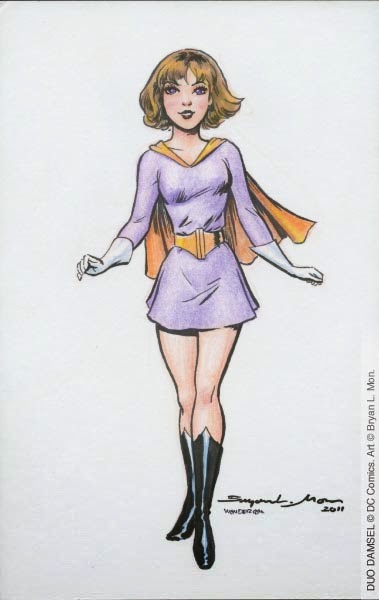 This came about from a miscommunication in a commission. The client collects sketches of Legion of Super-Heroes members. Unfortunately, he wanted her using her powers - in other words her wanted 2 or 3 of her. Like Thor above, the unfinished piece remained part of my art-for-sale collection for a few years. 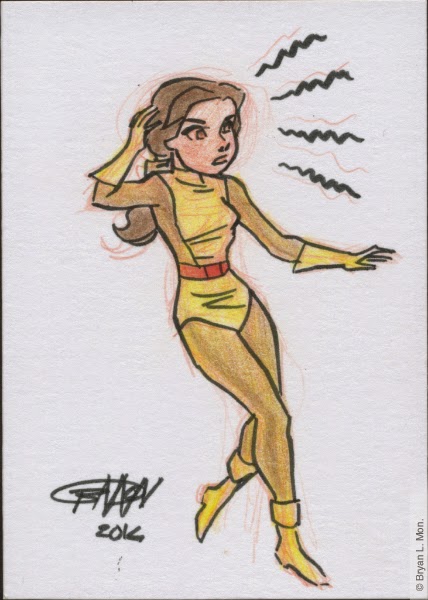 In this experiment, I put Belle (Beauty and the Beast) in a classic X-Men/ Marvel Girl costume and colored it in the palette of Belle’s ballroom gown. On a 3-1/2-inch tall card there’s a limit to that amount of detail to be added. In what became a series, I opted for tighter cropped portraits that highlighted the princesses’ faces. 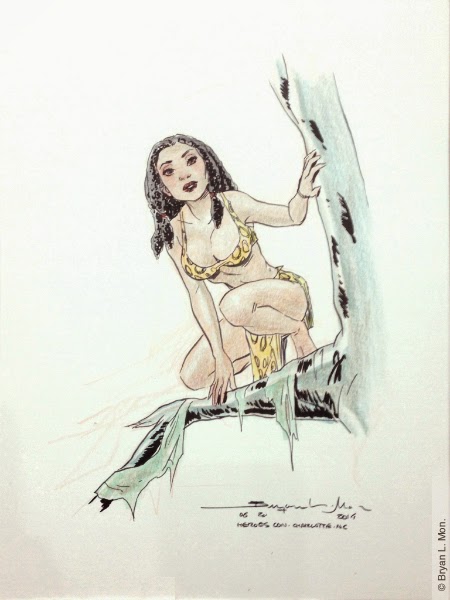 Jungle Girl
Black ink and color pencil on Bristol Board
2014

This was not so much a commission rather than an enticement done during Heroes Convention knowing that one of my regular commission clients had a jungle girl collection.

August 26: There are sixteen characters in this one strip!

The strip also introduces the idea that the hand cars tow some sort of converted carriage that accommodates several passengers.

This suggests that the hand car races are a relay event. If in the tradition of Disneyland’s Davy Crockett Explorer Canoes this also a theme park attraction by day, then only two persons are driving multiple cars carrying the weight of 6-12 persons – and up and down hills at that! Come to think of it, I don’t doubt that frequently the canoes are likewise only paddled by their two Cast-Members.

Otherwise, this is a bridge installment to get out of the races and into Stacy’s pancake diner.

Note: this is an even mix of the two teams, but only Al and Monster are wearing white “Defiant” team tee-shirts, while the others are wearing black “Pump You Up” tees carrying over an idea from 08/24.

August 27: Basically, morning races aren’t for every one.

Yes, in panel two, amongst the “Cheers” are scribbled “mumble”s. 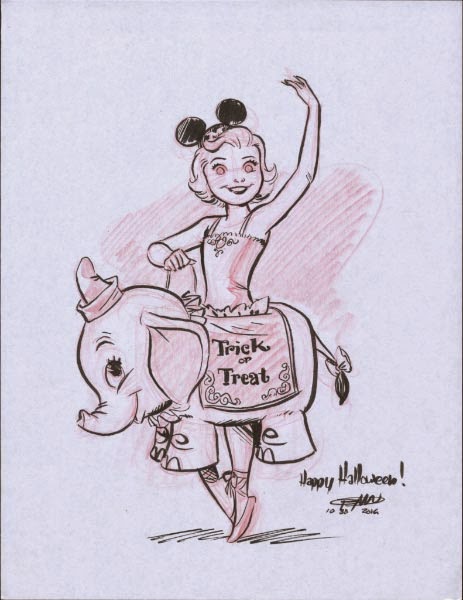 Focusing on costumes, I was inspired by the classic Mickey Mouse Club and particularly with its Circus Day. The Mouseketeers routinely performed in costumes. For western skits, they may have had galloped around with what I’ll call pony-dolls that had stuffed legs hanging off both sides for the illusion of them being the rider’s legs. You can find images of this from Disneyland’s opening day with the Mouseketeers in their western wear. So here, an elephant-doll, sans stuffed rider’s legs, is the same idea.

In the end, it doesn’t look like “Halloween.” If only Halloween had landed on a Thursday this year, then the thematic link would have been stronger, since “Circus Day” on the MMC was traditionally on a Thursday.

“Here Comes the Circus” from the Mickey Mouse Club:
http://youtu.be/D42Czi8TMSY

In this final installment of my sketch card mash-up series, I have the most challenged pairing.

However, let me present the final 5 royals. 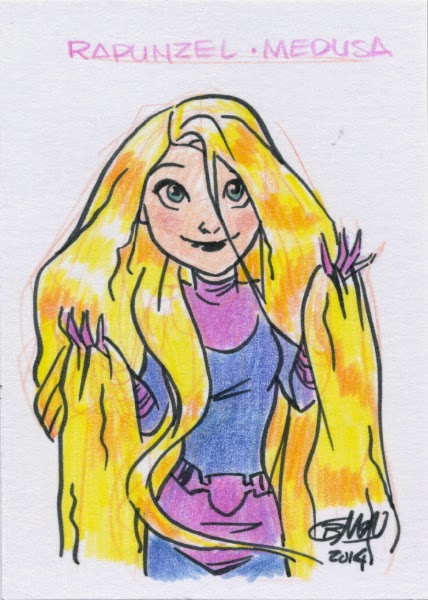 Rapunzel, kidnapped princess with magic hair that glows when she sings.
Medusa, queen of a race of super-humans with who can manipulate her long super-strong hair.
… because of shared long, long hair. 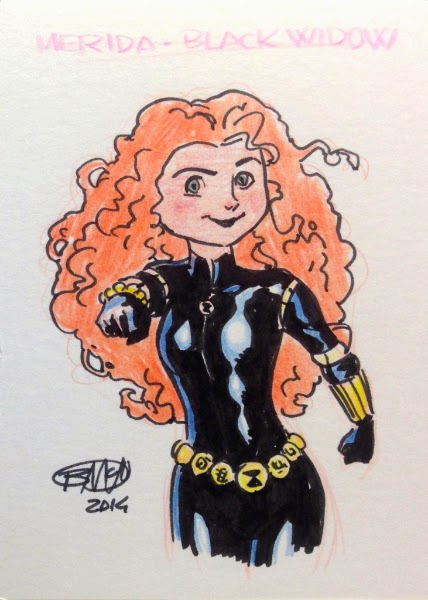 Merida, eldest child of a Scottish King, whose magically granted wish transforms her mother into a bear.
Black Widow, Russian super spy who allies herself with international espionage agency S.H.I.E.L.D., and the super-hero team The Avengers.
… because both are good at shooting things (red hair is a plus). 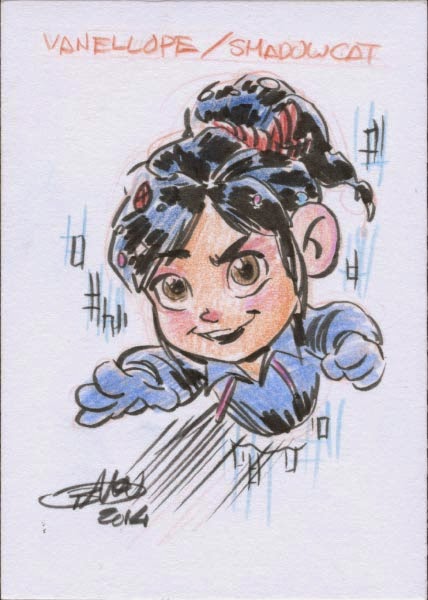 Vanellope von Schweetz, ostracized racing avatar in a video game who is revealed to be the land’s ruling princess.
Shadowcat, a young woman with the mutant ability to phase through objects and walls.
… because Vanellope, like Shadowcat, passed through walls when she “glitched.” 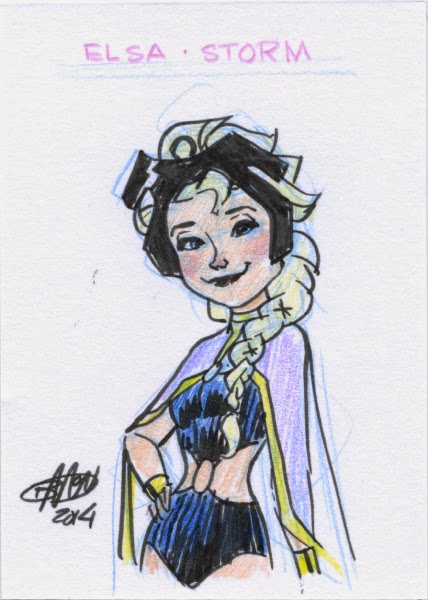 Elsa, crowned queen with the ability to create, control and manipulate ice.
Storm, former queen consort of Wakanda, with the mutant ability to control the weather.
… because both can create snow storms. 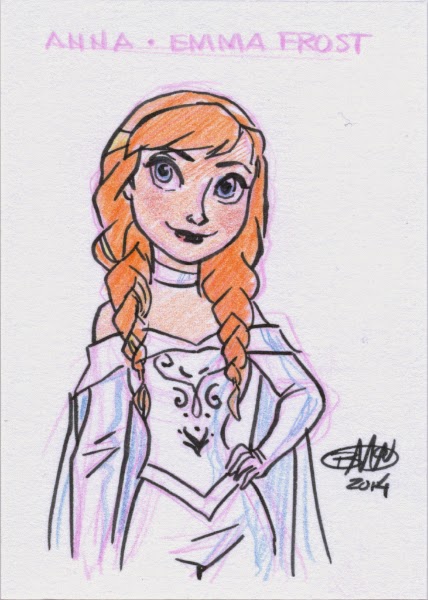 Anna, sister to Elsa who, through an accident, is struck by Elsa’s ice powers.
Emma Frost, once known as the White Queen with numerous mutant abilities including shapeshifting into a solid diamond form.
… because Anna as a result of Elsa’s powers is transformed into super-strong ice, which is similar to Emma Frost’s ability yet lacking mobility.

btw, Vanellope was a last addition not included in the sketch cards I had at comic cons the year.

While most folks seemed amused by the mash-up game of figuring out the princess/ super-heroine connections, consistently at every con, at least some one person challenged me that Elsa should be paired with Emma Frost. I don’t argue that the idea is a very good mash-up. A natural combination really. Both are powerful, blonde queens (of sorts) who wear sexy, light-colored, monochromatic costumes.

The problem is then, with whom to pair Anna? Suffice it to say, I’m not not clever enough to pass over Ms. Frost.

That all said over these four posting, I am very interested in hearing what you think.

Four more. Let’s get right to them. 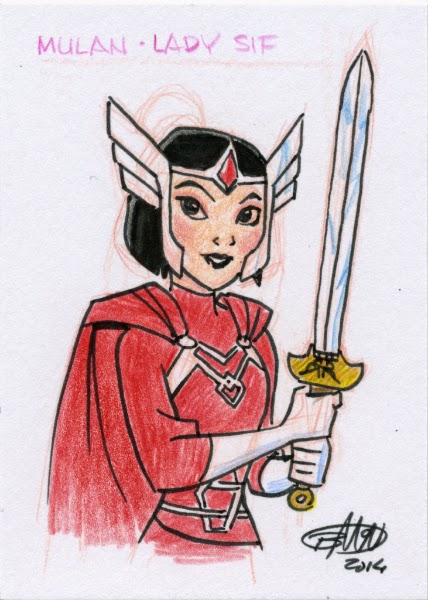 Mulan, loyal daughter who enters the army disguised as a man.
Lady Sif, Asgardian Warrior.
... because their both wield swords. 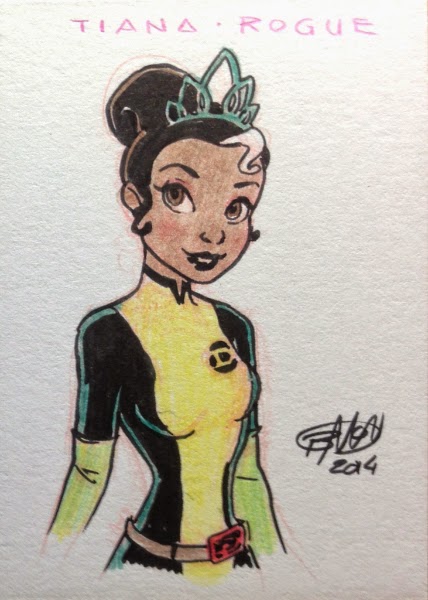 Tiana, hard working, young woman who gets turned into a frog.
Rogue, has the mutant ability to temporarily acquire the powers of other mutants.
... because both are transformed after a touch. 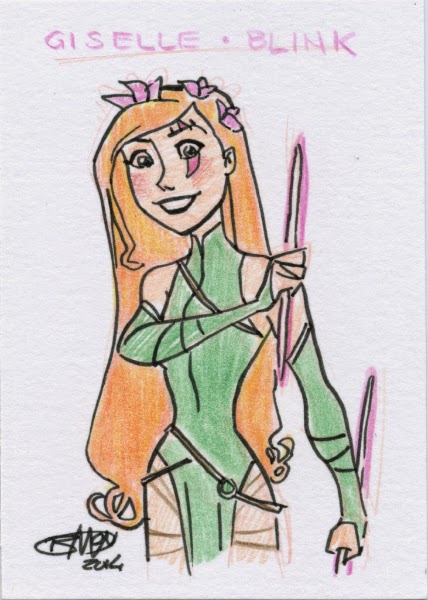 Giselle, fairy tale princess who accidentally crosses over into New York City.
Blink, a mutant from a possible future time line with the ability to teleportation portals.
... because both have teleported through portals to different places. 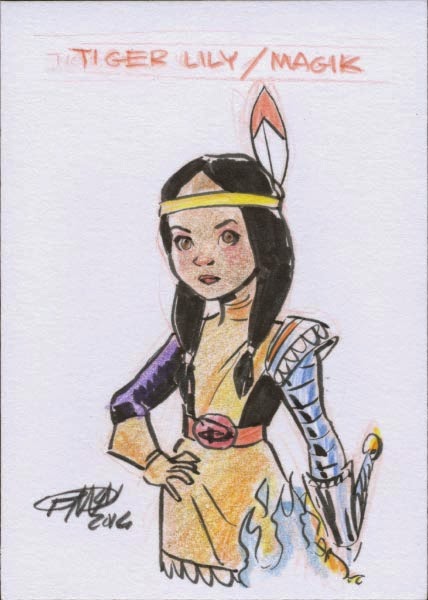 Princess Tiger Lily, daughter of the Neverland Chief who is capture by pirates.
Magik, sister of Colossus with the mutant teleportation powers who was kidnapped by Arcade to Limbo.
... because both were kidnapped by bad guys.


All of the individual princess and Marvel Heroine sketch cards were done after and since the comic convention during which I drew the first ten mash-ups. Tiger Lily/ Magik, however, was added late to the list, because, well, she’s easy to overlook since most princess lists don’t include Tiger Lily. Unfortunately, the connection isn’t the strongest mutuality.

Continuing my series of character mash-ups drawn on sketch cards with four more.

I can admit now that these mash-ups can be reduced to “Disney character dressed up as a Marvel heroine.” Beginning with Ariel from The Little Mermaid (1989), the Disney princesses have more personality and take more action, making the pairings with a Marvel heroine’s super-power easier and not totally random. 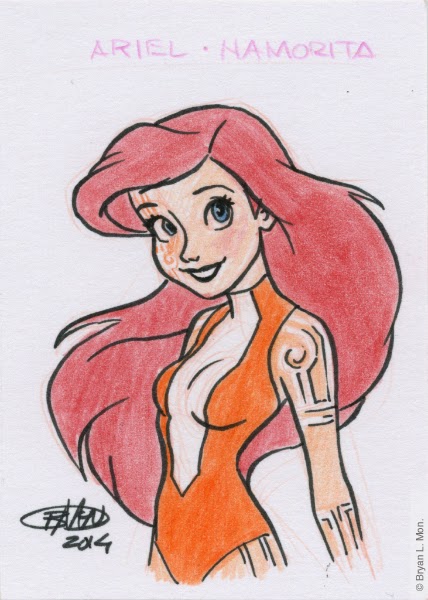 Ariel, the little mermaid who trades her voice to become human.
Namorita, clone of the cousin to Namor, the Sub-Mariner.
... because they both spend a lot of time under water. 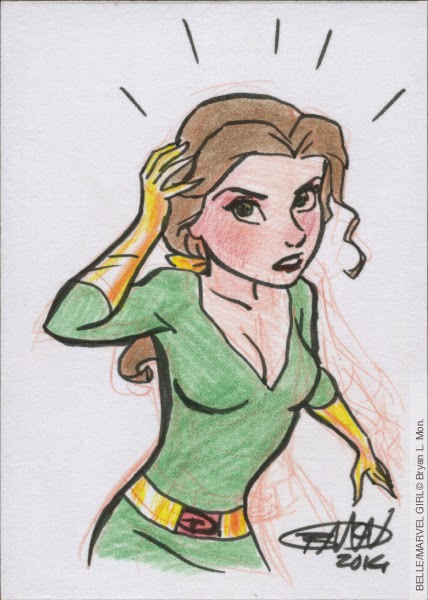 Belle, book-reading village outcast who falls in love with a beastly monster whom is a prince.
Marvel Girl, a tele-pathic, tele-kintetic founding member of the mutant group the X-Men.
... because Belle reads and uses her mind and Marvel Girl reads minds. 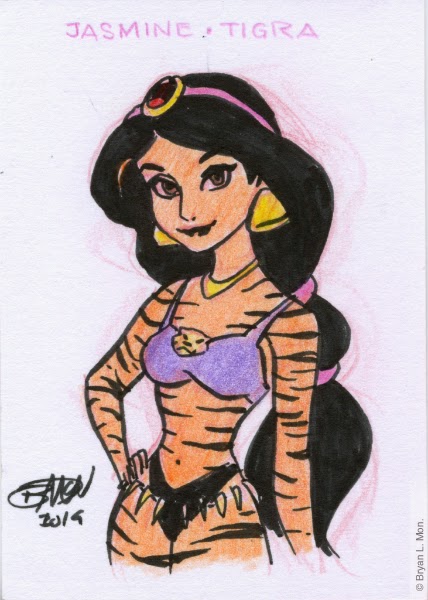 Jasmine, princess and sole heir to the desert kingdom of Agrabah.
Tigra, a vigilante who mutated into a super-powered tiger-woman.
... because Jasmine is a girl with a pet tiger and Tigra is a tiger-girl. 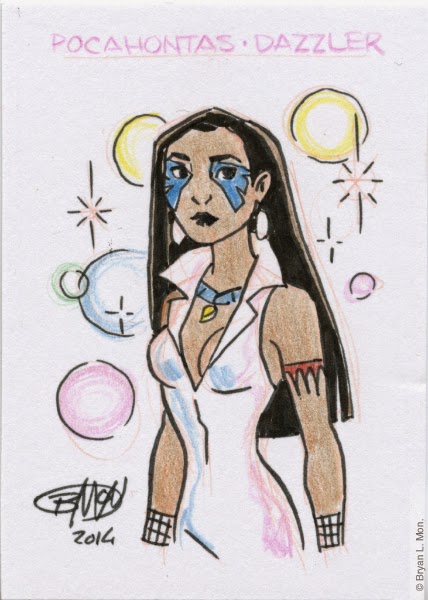 Pocahontas, daughter of Chief Powhatan who risks her life to save the English invader, John Smith.
Dazzler, mutant super-hero with the ability to transform sound into light and energy beams.
... because Pocahontas sings “Colors of the Wind” and Dazzler makes colors (lights) from the wind (sound vibrations).

As one of the first mash-ups done, Belle/ Marvel Girl along with Snow White/ Wasp lacks the title header, because I had thought it was a better game for folks browsing though these cards if it was all about the visual clues. It turned out that given the names, the game changed into figuring out why I paired the two characters.

I chose the blue-skinned look of Namorita over the classic one-piece bathing suit because Ariel in a one-piece wouldn’t look like a mash-up. That goes the same for passing over Alpha Flight member Marrina.