Once There Was Princess 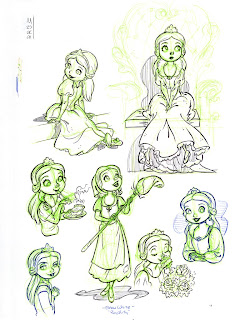 For a span of about two years, I drew princesses at Disney Consumer Products (DCP) group. It’s difficult, now, to say of what qualifications I had for such a position - drawing over 80% of the art of the character Mulan for her licensing styles guide and all of the Jessie art for Toy Story 2 guide? For my part, my interest was equal parts contributing to the custodianship of classic Disney properties and characters plus I like drawing girls.

It can not be overlooked that, DCP had divided into separate lines of businesses by categories (hard-lines, soft-lines, toys and new film properties) each with their own team of designers and artist, while the long time residing Cinderella artist, Diane Keener, had recently retired. I at least had Mulan, Jessie and a few Belle drawings in the portfolio, compared to the Mickey and Pooh artists in the soft-lines artist pool.

Unfortunately, fashion programs quickly turned out to be more design oriented, which favored artistic interpretations rather than the classic versions of the characters. Then next big thing was the company’s discovery that “The Disney Princess” was an untapped brand and the company’s decision to make it an official brand with product.

I had a satirical response to the trend of mashing Snow White, Cinerella, Ariel, etc. together on to tee-shirts: “The Royal World”. Drawing upon and spoofing the conceit of MTV’s “the Real World”, I had drawn up a little poster featuring six of the company’s most popular heroines, suggesting that in doing so that trouble would ensue. I then carried the idea further by drawing a few newspaper styled comic strips.

Five years later, it’s an idea that hasn’t died. In my current sketch book, I drew my version of the Grimm brother’s titular character, Snow White. The property, whether it reappears as a book, comic strip or TV cartoon, has been re-named “Royality”. The design is rather simplified as if for animation. Snow White takes on the leadership roll most often - mostly because, as they all live in her castle, after her wicked step mother/ queen has been dispatched.

The “Disney Princess” brand continues to be successful. No surprise considering that the princesses themselves have continued to be popular through the last seventy years. On the other hand, the success of films “Shrek”, “Hoodwinked” and to an extent the comic book “Fables” prove that its still worth satirizing.
Posted by Braynyac at 8/11/2007 No comments: Links to this post