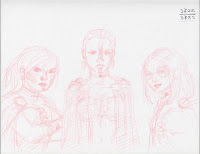 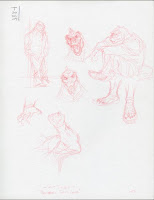 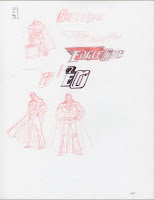 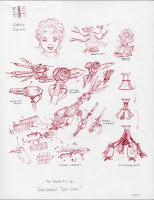 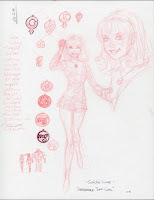 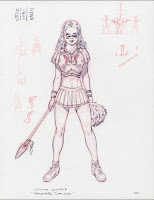 Here is an assortment of pages out of the last filled sketchbook, these focusing on ideas for some of Tuff-Girl’s adversaries. Designs and details may differ by the time they appear in "Unstoppable Tuff-Girl."
Posted by Braynyac at 6/28/2011 No comments:

Black and white as originally published.
India Ink on paper.

Digital composite of India ink and watercolor, with digital color of the logo.
Checkov (dragon, 9th appearance) and Connie (cardinal, 3) in an April appropriate situation.

It now occurs to me that it’s remarkable that the strip works without really answering the questions of “where” and “when.” On second thought, just by remarking about it doesn’t make it remarkable, and on third thought answering such questions is just my hang up and in the lacking of them the strip isn’t at all hurt. Here you go any ways: 1) they are strolling in one of the “backstage” areas of Happiland theme park, where customer/guests’ eyes are not permitted; 2) I like to think that they are on their way home having been released early on such a slow, cloudy day.

Panel 1: The bubble in his hat is a nod to scene from “Snow White and the Seven Dwarfs” with Dopey in the washing Grumpy for supper sequence. The underwater aspect also reminds me of Jiminy Cricket in “Pinocchio” when he was looking for Monstro the whale, especially with Checkov holding an umbrella.

As I continue to color these full page “Sunday edition” strips, many years after they were first drawn, I inch closer to an as-of-yet elusive satisfactory process. The down side for “monotonae” readers, I suppose, is that it throws off any imagined TAGS posting schedule. Case in point, I just painted this one this evening, while the last TAGS posting was three months ago. I apologize for that.
Posted by Braynyac at 6/21/2011 2 comments: 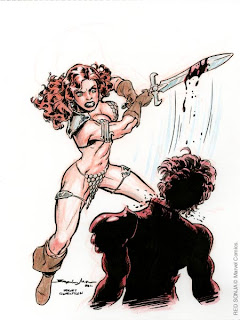 Red Sonja - A colleague requested this commission if and when I had free time during Heroes Convention. That kind of time never did become available to me. So I created it after I returned home from the con. and with the added benefit of the fact that had I started drawing on 9" x 12" boards in the midst of the con. having run out of comic book sized (6.75" x 10.5") backing boards which, for the purposes of penciling and inking, were necessarily un-coated on one side.
Posted by Braynyac at 6/12/2011 No comments:

Invisible Woman - Here’s another blank cover opportunity. While I’m more familiar with the Fantastic Four’s classic blue and black uniform, the client was totally okay with me drawing that rendition - however, the book itself is the first featuring the team reformed as the “Future Foundation,” assuming new black and white uniforms. 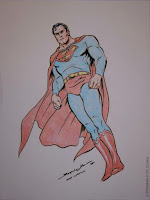 Superman, Samurai Jack - The clients of these two separate commissions were coincidentally female attendees of the convention, and although one had a sketchbook in which she was collecting drawings, both seemed to approach my table as a new discovery and were neither certain of the subject matter they wanted me to draw. I guess it was because of all the “Tuff-Girl” stuff and the fact that I had been drawing so many girls. 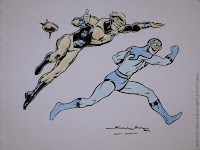 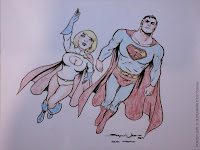 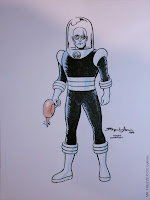 Booster Gold and Blue Beetle, Power Girl and Superman, Mr. Freeze - There were a few clients who discovered me last year and returned for more. At this point these separate collectors had long exhausted their regular request list, so they’d start off with “How about...” followed by a contemplative pause. At least, they hadn’t begun the “Stump the Artist Game.” 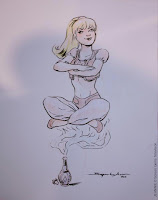 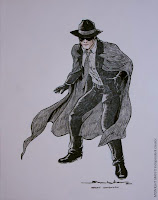 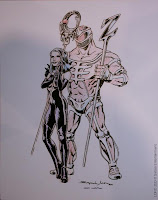 “Evil Kimberly” and Lord Zed - This double character commission based on characters from the “Power Rangers" series was the most surprising theme for me to add an original drawing. I think “Evil Kimberly” was a costume design original to the collector.
Posted by Braynyac at 6/11/2011 No comments:

Email ThisBlogThis!Share to TwitterShare to FacebookShare to Pinterest
Labels: comics

Heroes Convention, Charlotte, NC, June 3-5, 2011. Business was good this year for me where I had a table in the small press area, as compared to last year’s full exhibitor booth. I was nearly busy the whole convention from the start of Friday to the closing on Sunday with commission sketches including some over-night work done in my hotel room. Was it my location, a near beeline right out front of the Men’s rest room? Was it my extremely reasonable rate of $15 per character? Has some one been talking about my great service from last year?

This year’s strategy was to offer a copy of “Unstoppable Tuff-Girl” No.1 for each first commission order. Gotta get the book circulating, you know. Also new for me this year - I came with more than just red and blue color pencils.

Here are ten samples of what I drew, featuring what seems to be the norm, girls. Please forgive the mottled lighting of these photographs with my shadow cast over the art, the flash failing to completely obliterate it: 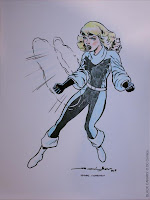 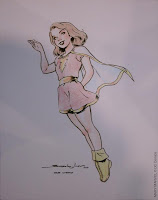 Black Canary, Bat Girl and Mary Marvel - Could it be that DC Comics’ women are more popular than Marvel’s? I do seem to draw more of them, so it’s a good thing that I’ve memorized a lot of their silver age costumes. Black Canary was in the collector’s theme of Justice League International members; otherwise I would have opted for the 1960’s fishnet stocking costume. Mary Marvel was the very last commission (because I could squeeze it in) that was almost an artist’s choice piece. 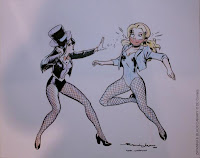 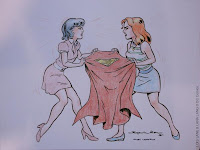 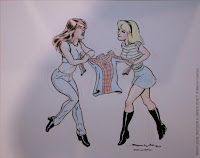 Zatana vs. Black Canary, Lois Lane vs. Lana Lang, Mary Jane vs. Gwen Stacy - I don’t discourage multiple character compositions on con. sketches, but they do require a bit more planning with the layout both with figuring out spatial and interpersonal relationships, and of course they require more time to draw. At any rate, as such, I drew a few “versus” comps. “Z v BC,” is this an imaginary story of the battle of the fishnet heroines? “Lois v Lana” I didn’t want actual contact fighting and hair pulling, so I had them fighting over this valuable souvenir. “MJ v GS” was done when this collector saw the previous and wanted this Marvel pairing. 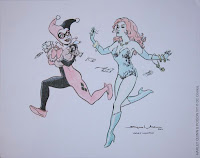 Harley Quinn and Poison Ivy - Speaking of “pairing,” this is a popular team up from Batman’s rogues gallery. Any hesitancy of depicting Harley’s in this unlady-like pose on my part quickly gave way because it contrasts Ivy and it’s funny.

Mary Jane Watson - Spider-Man/ Peter Parker’s girl-friend/ wife, being a civilian, doesn’t have a costume, so that means I get to make things up, right? I think that if I compare it to John Romita’s work that I’d find some detail I missed. I personally don’t know where you can obtain them, but publishers like Marvel here print blank covers, expressly for original art to be draw on them. The coating made it tricky not to smudge the inking, and it seemed not to take color pencils too well.

Belle - On occasion I get to access my Disney past with a princess (or Tinker Belle) drawing.

Love Bunny - The prepared collector arrives at comic cons. with reference, as he this one did in this case of an Image character I had never seen previously. I thought she was out of “The Tick.”
Posted by Braynyac at 6/06/2011 No comments: