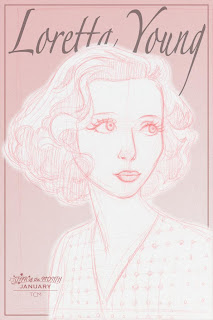 red pencil on paper with digital embellishment
from sketchbook
Inspired by the cover of Now Playing magazine, January 2013.

Turner Classic Movies (TCM) is one of the sister networks of Cartoon Nework (where I work) of Turner Broadcasting Systems, a Time Warner Company. With their monthly programming magazine available to me, I thought, why not draw some caricatures during my lunch hour? 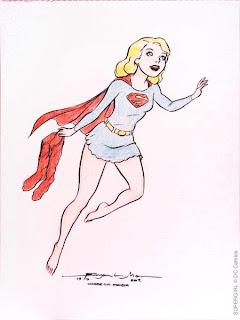 Commission drawing.
color pencil and black ink on Bristol board.
2012 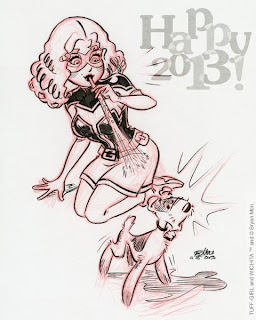 As I was almost able to post some thing new every week on monotonae in 2012, I am quite certain that I will be able to almost post something new weekly here on this blog this year. Since it’s start, I had been hoping to post things - some thing - on Mondays, just because you would think that’d be “my day”. It has turned out that it’s easier said than done. My less-less regular posting of fan art on my annex tumblr blog isn’t promising to be any more regular this year, but I’m setting my sights on some random once-a-month post.

I hope to return to four comic conventions this year. WonderCon will be once again be hosted at the Anaheim Convention Center in California. Heroes Convention in Charlotte, NC is a solid comics show I’ve enjoyed on both sides of the exhibitor’s table. I’m looking to try artist alley space at Orlando’s MegaCon in Florida, a change from the small press booth of last year. And the home town extravaganza of Dragon*Con in Atlanta, GA becons.

Work on issue #3 of Unstoppable Tuff-Girl will commence in the next month, which will feature a story by guest writer, Matt Laster. I’m fixing to do somthing special to commemorate the nephew’s birthday. And the back-burner project that’s the TAGS re-launch may yet be getting some heat.

Commission orders will continue to be a comic convention enhancement, so keep your eyes open to the conventions’ schedules as I start fielding pre-orders a month before a con.

Have a good one, and stop by and say “hi” if I visit a con near you.