Here are the top 3 liked pieces from the “Marvel Day” edition of WSIDT:


#1 - Vision and Wanda: suggestion by @jonmpeterson 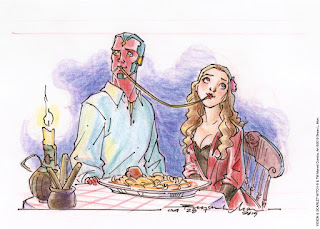 Wanda and Vision eating spaghetti a la Lady and the Tramp. Not yet having seen “Endgame,” I’m guessing that this does not happen in that film. Maybe it will in their Disney+ series.

For the non-comic literate, the couple would have a couple of kids. It’s complicated. Whether or not the iteration realized in the Marvel Cinematic Universe has developed either naturally or satisfyingly is perhaps debatable, but then romance isn’t what the MCU is about.

As for Lady and the Tramp, the classic animated feature may be the Disney company’s first romantic comedy and may have stood as the only animated rom-com for decades until Tangled. Feel free to discuss.

So mashup the couple with the iconic scene and I give you this. NOW, they’re in love. Tony, start the music. 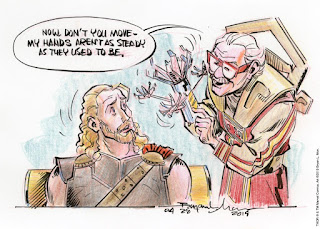 I’m hesitant to merely recreating a scene directly from film or television, but that’s pretty much what this is taken from Thor: Ragnarok. I just changed the framing (camera placement) for a better two-shot. And there wouldn’t have been much point to put Stan in civilian clothes like, say, a comfortable sweatshirt.

I think that I could have pushed Thor’s expression to be something more terrified.

I considered and abandoned a layout that  squeezed in Thor’s response of “Please, no.” I opted for the story telling to play in the readers’ minds to its natural conclusion, rather than underscoring it with the obvious.

I also considered and abandoned widening the shot to include the wrist restraints that prevent Thor from defending himself as depicted in the movie. In proper visual storytelling, it’s an important omission. But I favored, concentrating on the expressions. 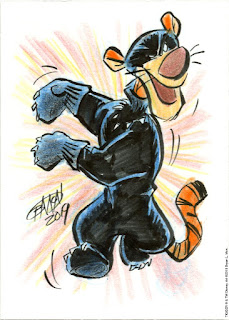 This is the denizen the Hundred Acre Woods dressed and the Wakandan warrior-ruler. Rather than the full-face-covering mask, he’s wearing something more akin to a kid’s costume.

Does it read well? Without fingers to pose as claws, a typical Black Panther pose seems pointless (pun!).

Maybe he needs a big picture of Black Panther on his chest for clear branding that is found on halloween costumes in the 1960s and 70s?

And what to call the mashup creation? Black Pouncer? 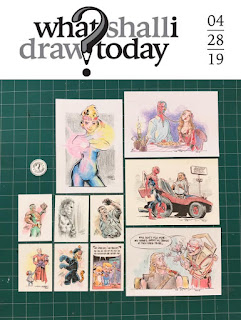 The next WSIDT is schedule for May 26th (corrected from May 19th).

You can check out my Instagram feed for more drawings @monstergram7

Thank you for following and liking.

What Shall I Draw April 28th? 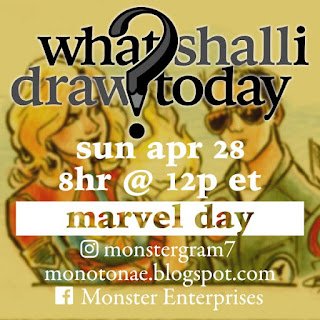 WSIDT for April will be a Marvel Day! And why not? It just so happens that it’ll be the premiere weekend for Marvel’s Avengers: Endgame.


For this Marvel-themed session, I will be selecting drawing suggestions that feature Marvel characters for the entirety of that Sunday. Suggestions that are not Marvel-themed, will be bumped as fodder for things that I might draw in the weeks following April 28 to be shared on Instagram. I must warn you, that my schedule, as of late, has made it difficult to do such drawings. Nevertheless, if I find the time, then that’s where I will pull ideas.


Staring right now through the close of WSIDT Sunday, please post your suggestions at any of the following social media spots where you find the above prompting image.

Blog:  monotonae.blogspot.com (here in the comments. Please leave a name if you’re an anonymous guest)

Email ThisBlogThis!Share to TwitterShare to FacebookShare to Pinterest
Labels: Captain Marvel, Marvel, mash-up, sketches, What Shall I Draw Today

To mark the recent event of my Instagram feed surpassing 4,500 followers, I drew Tuff-Girl and her dog Wichita celebrating that same event. She just happened to be dressed in semi-western attire. The construction sketch and inking was caught in a time-lapse video (above). 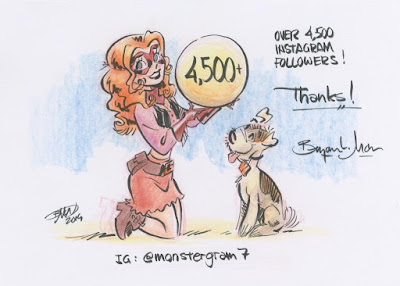 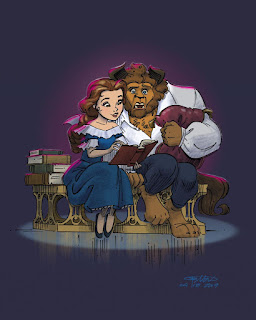 Disney Theatrical, which produces stage high-end stage entertainment, launched in a big way when its interpretation of Disney’s animated feature premiered on Broadway on April 18th, 1994. Last week, it marked the 25th anniversary of that event.

The production kept to a safe path by sticking closely to the animated source. It’s not a too off critique to view it as a more elaborate, lavish and expensive version of those mounted in the company’s theme parks, like for example, the 30-minute, long-running production in Disney’s Hollywood Studios, Walt Disney World, Florida.

The two-act libretto with intermission, is extended with several new songs. Not the least of which is a subtly re-worked version of “Human Again” which lyricist Howard Ashman and composer Alan Menken had originally created during the production of the animated feature. Basically, it’s seeing Belle’s and Beast’s relationship develop from the point of view of the Enchanted Objects including  Lumiere, Cogsworth, Mrs. Potts and Chip. 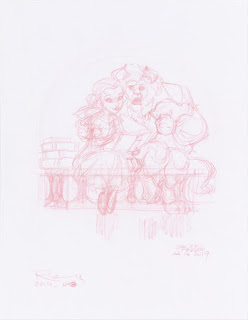 When the anniversary snuck up on me, I quickly came up with this image to celebrate the musical. It’s a moment from “Human Again” where Belle reads to the Beast the tale of King Arthur and his knights of the fabled Round Table. No Enchanted Objects here to pull focus from these leads.

Here, I again demonstrate in red pencil how loose my sketching stage can be when my inking part is to happen right on its heels. The pillow in the Beast’s left arm is an invention to help sell the idea that he reflexively needs to protect himself in sympathy of protecting the characters of the story that Belle is reading. It’s not used in any of the few images that I’ve seen from the stage play. The stack of books to the left, is a last addition to help balance the composition. 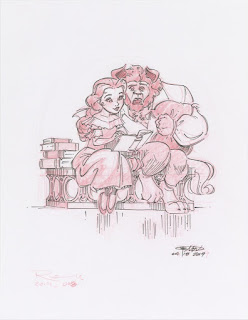 In that inking stage, I employ my developing style of broken and doubled lines, with dots, dashes and bubbles. Light shading with the same red pencil used in drafting the art, is used to add areas of contrasting tone and suggest some volume to forms with approximate shading.

As I’ve detail previously, the choice of a red pencil has mostly to do with red being “R” in RGB which is the three channels that typical scanners (and digital photography devices) record images. So then the red channel reveals a pretty high contrast version of what is black and what is not (the white and red parts). The human eye probably likes red  as an association to “warm” and living mammalian things. I like that artist in the past drew with red pencils and crayons in the explorative comprehensive stages. It seems to be a color that’s easy or cheaply produce for drawing painting.

Did you find the hidden Mickey?

Do you agree with the reasons behind the pillow and stack of books?